5 Major Types of Renewable Energy and What You Should Know 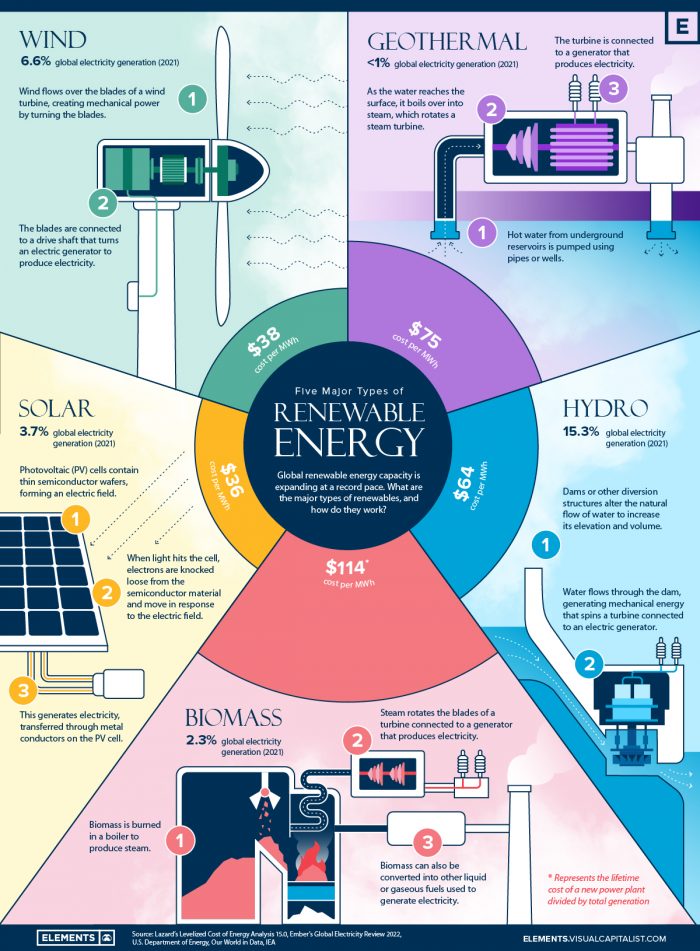 You’re probably familiar with wind as the source of energy that pushes a kite in flight, or as the gusts that send you running for your umbrella. Wind is caused by air molecules moving and interacting with each other. Wind turbines convert wind energy into mechanical energy, which can be used to generate electricity. Wind has been harnessed for centuries by sailing ships, but only recently have we discovered how to use it in large quantities to power entire cities. Wind energy has become an alternative source of power for many people around the world who live far from major cities or don’t have access to electricity grids or fossil fuels like oil and coal.

Geothermal energy is a form of renewable energy that comes from the Earth. Geothermal power plants use geothermal heat to generate electricity or to provide heating and cooling for buildings or industrial processes. Electricity generated from geothermal resources is called “green electricity.” It’s considered renewable because it is derived from naturally replenishing sources, such as the sun and wind—and it doesn’t produce carbon emissions when used. The National Renewable Energy Laboratory reports that geothermal electric generation produces about 2 percent of the nation’s total electricity supply (as recorded in 2017), up from 1 percent in 2016.[1] A report by the International Renewable Energy Agency (IRENA) estimates that globally, 7 gigawatts (GW) of new capacity was added between 2014 and 2015.[2] In this article you will learn more about what type of equipment can be used to generate geothermal power; how much hot water can be produced; where this resource exists on Earth; what environmental impacts exist with utilizing this resource; if there are any additional costs associated with using this resource as compared with other alternatives available today?

Solar energy is a source of renewable energy that comes from the sun. It can be used to generate electricity, or it can be used in homes as an alternative to fossil fuels for heating and cooling. The two main types of solar power are photovoltaics (PV) and concentrated solar power (CSP). PV uses semiconductors to convert sunlight directly into electricity, while CSP captures the sun’s heat using mirrors to produce steam that turns turbines connected to an electrical generator.

Hydroelectric power is the cleanest and most widely used form of renewable energy. The basic idea behind hydroelectric power is that water flows through pipes and spins turbines in order to turn generators, which produce electricity. Hydroelectric power plants are especially useful because they can be built at places where there are strong currents or high volumes of water flow. A damming structure must be created in order to divert water into the pipes needed for electricity generation. However, dams create a problem as well: They disrupt natural ecosystems and cause changes in local ecosystems due to flooding and other changes caused by the damming structure itself (such as pollution).

Biomass is organic matter that can be converted into heat, electricity, or transportation fuels. Biomass is the most popular form of renewable energy, used to power homes, offices and factories through biomass heating systems. It is also used in vehicles like cars and trains that run on biofuel—a fuel derived from plants or animal materials (such as corn). Biomass energy has been around since humans began burning wood for heat. Today it’s one of several forms of renewable energy sources we use to generate electricity with wind turbines or solar panels to power our homes or businesses so you’re never left without electricity when you need it most!

Renewable energy is the type of energy that is created from natural resources, such as wind, water, the sun and biomass. Renewable sources are sustainable and do not deplete resources like fossil fuels do. The biggest benefit of renewable energy is its ability to generate electricity without releasing carbon dioxide into the atmosphere or creating other pollution (like nuclear power does). Wind power uses wind turbines to generate electricity through converting kinetic energy into mechanical power. Blades spin in front of a generator which creates electricity when they turn inside an electromagnetic field created by magnets on either side of them. There you have it—five major types of renewable energy. These are just some of the kinds of energy that we can create from natural sources around us, but they’re all pretty fascinating in their own way. And as always, if you have any questions or comments, feel free to leave them below!