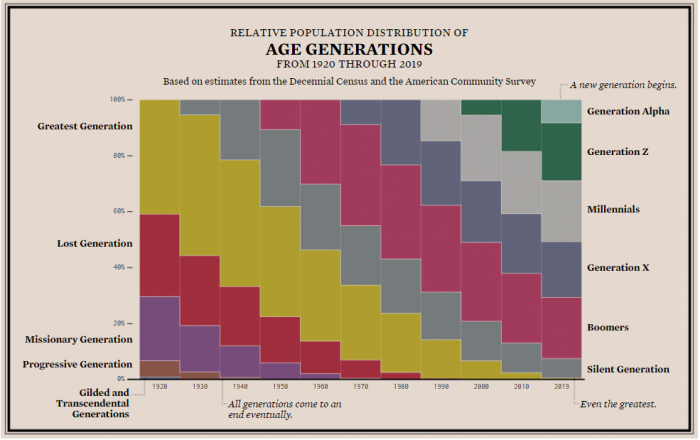 This timeline of American generations is useful to visualize the changing demographics. It gives us a snapshot of the generational breakdown of each year from 1920 through 2019.

Appropriately named, the greatest generation went through some hard times and is largely responsible for the America we have today. This generation was coming of age during The Great Depression and were then the primary participants in World War II. The terminology comes from a book by journalist Tom Brokaw in which he profiled members of The Greatest Generation and their tough early years.

This is one of the smallest generations due to The Great Depression and World War II causing people to have fewer children. They are known for fighting in The Korean War, forming the leadership of the Civil rights movement and creating rock and roll music. The Silent Generation got it’s name for the fact that the children of the era were silent and reserved compared to the rowdy and playful way most children behave, likely due to the tough environment they were born into.

By all accounts the Baby Boomers have really hit the jackpot in terms of when they were born. The post-war boom was in full effect and people had lots of babies. This time period marked significant education and housing reforms, and set the stage for a period of great wealth creation. Baby Boomers are the largest demographic in America, and most developed nations.

Major factors at play for Generation X were the increasing divorce rate and increased labor participation by females in society. This earned Generation X the moniker “latchkey generation” because there was less adult supervision during adolescence than previous generations. It was a time of social division and the rise of television. There was also a rise in geopolitical tension during this time with the Cold War coming to a head.

Millennials mark the continuation of patterns that began to form with Generation X. Marriage is often delayed, childhood extended, and on average people from this generation are having less kids. Millennials are the first generation to be “digital natives”, which means they grew up with the internet, computers and other modern technologies that have shaped began to shape the world. This generation graduated college during the height of the 2008 financial crisis and has had a rough go of it so far in terms of career growth and wealth creation.

Also known as “Zoomers” this generation is defined by social media. They are the first generation to grow up with social media and with uninhibited access to screens. Some major trends that have begun to develop are the increase in allergies, mental health issues, and less time spent in person to person interactions.

While this chapter is still being written, Generation Alpha are typically children of Millennials. This may be the first generation where the effect of aging demographics begins to play out and populations of many developed nations begins to contract. Time will tell what Generation Alpha is best remembered for.