8 Different Types of Love According to the Ancient Greeks 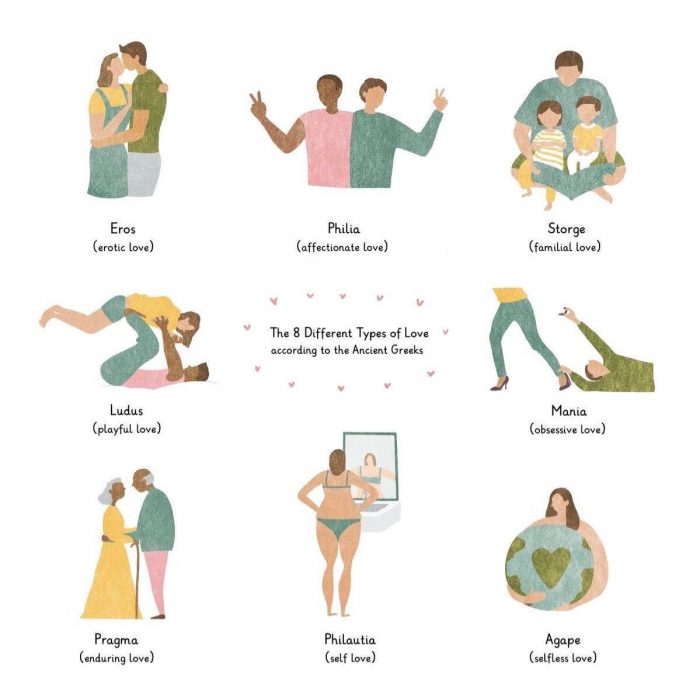 I’m sure you’ve heard of the four loves: friendship, family, romantic and divine love. These are the most widely known types of love in Western cultures, but they’re not the only ones. In fact, there are at least eight different types of love—and knowing them can help you find the right one for you.

Eros, the god of love and desire, is a type of love characterized by passionate and intense feelings. Eros can refer to romantic or sexual attraction between two people who are in love with each other. The word was used as early as Homer’s epic poems, but it wasn’t until Plato that we started seeing it used more specifically in reference to sexual desire. Eros is often associated with physical beauty—the kind that leads one person to desire another. But according to Plato’s Symposium (a philosophical discussion about love), this form of passion can transcend superficial beauty and become an experience of divine oneness between lovers—if only for a moment!

Philia love is the kind of love that you feel for your friends, family members or anyone who has a common interest with you. You might have philia if: You hang out with your friends often and want to know what’s going on in their lives; you go on family vacations together; you’re interested in someone else’s hobby because it gives them joy and makes them happy.

Ludus refers to the playful love of a child. The term is derived from the Greek word “ludum”, which means game or sport. Ludus is characterized by a light-hearted, carefree attitude toward relationships and romance. It’s the type of love that you feel for your best friends—the kind of person who can be trusted with anything in your heart and mind because they won’t judge you or try to change you (not even if they want to). In its most basic form, ludus is what many people refer to as flirting or playing hard-to-get. This kind of playfulness can also be seen in other important relationships like those between cats and mice, athletes competing against each other in games like tennis and boxing, or any relationship where both parties have an interest in teasing one another but not hurting them (or themselves).

Storge, translated as “affection” or “friendship,” is the most common type of love and a very different beast from the romantic version. Unlike eros and agape, which require some kind of reciprocation in order to be considered successful, storge is unconditional. There are no strings attached—it’s just you loving your family member or friend unconditionally because they’re part of your life. Storge can lead to philia (a deep admiration for someone) if there’s enough friendship going on between two people; but unlike with eros and agape, it doesn’t have to be mutual at all. In fact, many times storge can be more unromantic than an actual romance simply because it isn’t dependent upon anything else besides being born into the same family unit or becoming friends with someone over time due to shared interests or hobbies.

Pragma: This is a type of love that is based on mutual respect, practicality and commitment. In other words, it’s the kind of love you see in movies. Pragma is not the most passionate type of love—but it can still be deep and meaningful. It’s also one of the most important types because it describes how people stay together for long periods without becoming bored or disillusioned by their partner.

Mania: This is not a healthy type of love and can be quite harmful to the one you love. It can also be difficult for you to see that it is not healthy, since mania is all about obsession and possession. Mania is the opposite of agape in that it involves an unhealthy need for control over the one you love. Mania is a type of love that is obsessive, possessive and irrational—it’s not based on mutual trust between two people who are equals in their relationship. Mania puts someone else as more important than yourself; whereas agape loves another person regardless of what they do or how they behave towards you (even if they don’t like being loved back).

Philautia is the love of self, or self-love. The Greeks believed that this was one of the most important aspects of love because if you don’t love yourself then how can someone else? You can’t expect someone to love you if you don’t love yourself and vice versa. The Greeks also believed that philautia was an important characteristic in a person and part of what makes them attractive. If a person didn’t have enough philautia for themselves, it meant they weren’t confident enough in their own abilities and couldn’t be counted on as a partner or friend. In modern times, we have also associated philautia with confidence—the ability to take risks without fear of failure because we believe in ourselves so much—but this wasn’t always the case for ancient Greece; instead, it had more meaning about being proud of your achievements than anything else

Agape is the highest form of love, and it is selfless. It’s a love that doesn’t expect anything in return; it’s just a pure and unconditional act of kindness. In fact, agape is not based on physical attraction or sexual desire at all—it’s about loving someone for who they are as an individual. This type of love can be difficult to achieve because it requires us to be completely selfless when showing our affection toward other people, but if you’re able to do this then you’ll know what true agape feels like!

There are many different types of love. Knowing them all can help you find the right one for you. We hope that this article has helped you to better understand the different types of love. There are many more that we didn’t mention here, and there are probably even more that have yet to be discovered! The most important thing is that you find the type of love that works best for your own needs.