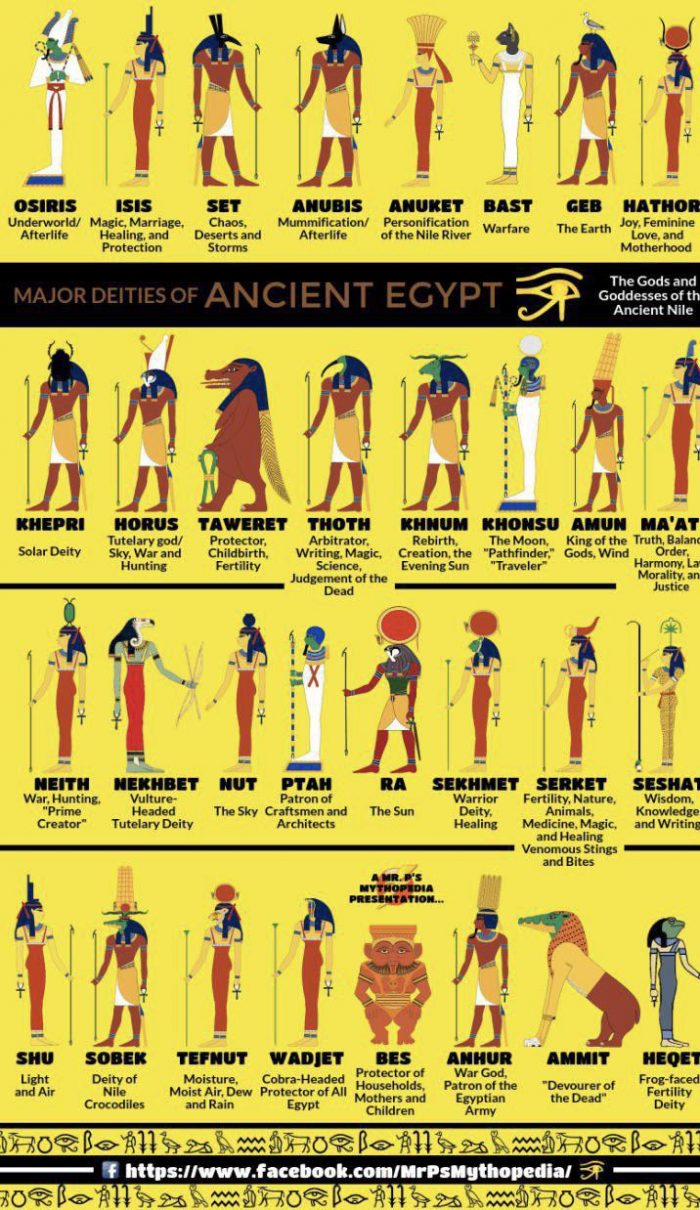 Ancient Egypt was a polytheistic society, meaning that people worshipped many gods. The most important of these were the major deities of ancient egypt, who were part of the official Egyptian pantheon. In addition to the major deities, there were also minor deities and lesser goddesses, as well as demigods and demons. Here is a list of some of the major gods and goddesses:

Osiris, the god of fertility and the afterlife, was worshipped as a protector of humans. He was married to Isis and fathered Horus with her. He was also known for being one of the most powerful gods in ancient Egyptian mythology. Osiris’ role as ruler over Egypt’s underworld gave him significant power over death and rebirth; he was considered to be a god who bestowed fertility on his people through both physical reproduction and agricultural growth. During this time period, which is now referred to as Egypt’s Old Kingdom (2686 BC-2181 BC), Osiris was also honored as a solar deity—a representation of Ra or Re—and associated with other solar deities like Khepri or Horus-Re when they rose in the eastern sky at dawn each day.

Isis is the most powerful goddess in the Egyptian pantheon. She is a symbol of magic, healing and motherhood. She was also associated with protection, reincarnation and the afterlife. The name “Isis” means ‘Throne’ or ‘House’, which refers to her role as queen consort to her husband Osiris who was king of Egypt at one time (and later his son Horus became king). Isis was also known as ‘Great Enchantress’ or ‘Lady of Magic’. As well as being a goddess of magic, she was also considered to be a protector against disease and evil spirits.

Set, god of destruction, chaos and disorder. Set was the Egyptian god of the desert and storms. He was also associated with foreigners, as they were often thought to be bringers of chaos. He was also a patron of Upper Egypt (where he was worshipped) and played an important role in the story of Osiris. Set’s father is Geb (the earth god), while his mother is Nut (the sky goddess). As such, he has two brothers: Osiris and Isis

Anubis was the Egyptian god of mummification and embalming, who was also responsible for guiding dead souls to the underworld. Anubis’ name means “inpourer” or “one who is upon his seat.” Anubis was depicted as a jackal or man with a jackal head wearing a headdress that resembled the hieroglyphic sign for “topknot.” He holds his sacred animal, the dog, in his arms. Anubis was the son of Osiris and Nephthys, twin brother of Horus and husband to Bastet (Bast). In some myths he is associated with Typhon, god of evil storms.

Anuket is the goddess of the Nile River. She was worshipped by ancient Egyptians and depicted as a woman with horns or a woman with a gazelle’s head. The meaning of her name has been lost over time, but it may mean “she who gives birth.” Anuket was associated with the goddess Neith, who was also known as Mehit and Mut. Anuket was originally considered to be Neith’s daughter but later became her mother when Neith took on many characteristics of Anuket.

Bast, also known as Bastet or Ubaste, was a feline goddess. She was sometimes represented as a lioness and is thought to have been originally associated with the sun god Ra. Bast was the deity of warfare and protection of the pharaoh. She also protected women during childbirth, even mothers of animals such as cats and snakes were said to be under her guidance. Cats were sacred in ancient Egypt and considered a friend of Bastet as well as other deities like Anubis (god of embalming) and Hathor (goddess of fertility).

Geb was the god of the earth, and he symbolized fertility. He was often associated with green, which is why he’s sometimes represented as a green-skinned man. Geb was married to Nut and their union produced three children: Isis, Osiris, and Set (Osiris’ brother).

Hathor was a goddess associated with love, music, dance, and beauty. She was also the mother of Nefertum, who in turn became the god of perfumes. Hathor was often depicted as a cow or as a woman with cow’s horns on her head and she was considered to be the patroness of both music and fertility. In Egyptian mythology Hathor had four sons: Ihy (Ihy), Hapy (Hapi), Duauf (Duauf) and Hu-Saf (Hu-Saf). Hathor was also associated with the sun god Ra who gave her his eye to protect her from Set when he tried to kill her by drowning her in blood after he murdered Osiris who had taken refuge with him. After Osiris’ death she became one of his chief attendants in heaven where she helped watch over him until his resurrection on earth after which they were reunited there for eternity.

Even though we may not understand the ancient Egyptian culture and its people, it’s important to remember that they had many gods and goddesses they held dear. The ancient Egyptians had a complex and rich belief system. They also had a rich mythology, which helped shape their history.