How Much Electricity Does Bitcoin Mining Use? 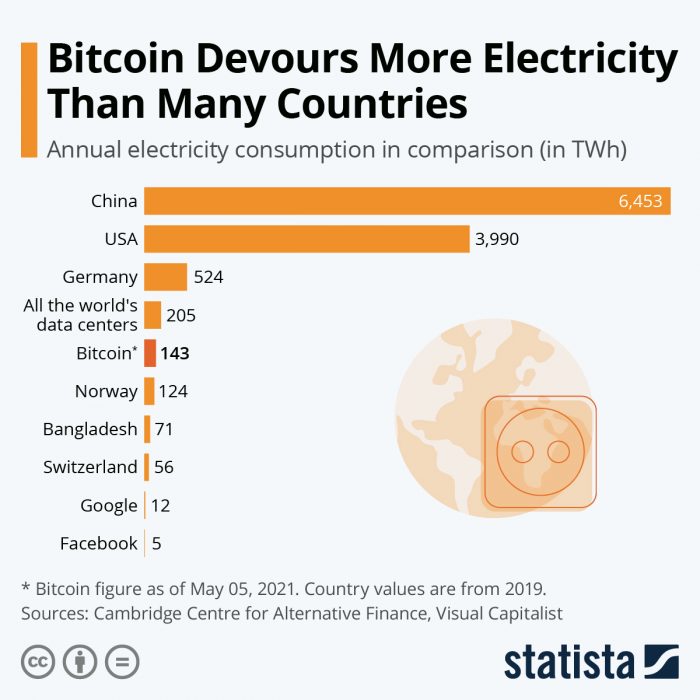 The value of Bitcoin has increased tremendously over the last few years, but it has been criticized for the high amounts of electricity consumed to mine new bitcoins. But what is Bitcoin mining, and just how much energy does it take?

What Is Bitcoin Mining?

Mining Bitcoins is a process through which bitcoins are added to the cryptocurrency market through power-intensive computers. The process involves complex mathematical calculations and requires thousands of powerful computers operating 24/7.

How Much Electricity Does Bitcoin Mining Take?

Researchers from Cambridge University estimates that the mining process devours 143 terawatt-hours (TWh) of electricity annually, which is more than the yearly electricity consumption of some countries. For instance, Norway consumes only 124 TWh, and Bangladesh consumes 71. Also, Bitcoin mining requires more energy than the largest technology companies like Google and Facebook.

Some miners have moved to countries with high geothermal energy production like Iceland to reduce electricity consumption. Also, the cold Arctic air helps with cooling the computers.

Bitcoin, however, uses less power than some countries like China, the United States, Germany, and the world’s data centers. China consumes the highest amount of electricity totaling 6453 TWh in a year.

Is Bitcoin Bad for the Environment?

Bitcoin’s history with the environment is a troubled one. As more people continue to invest in Bitcoins, its effects on energy and the environment get more rampant, and the need to develop a solution becomes more pressing.

As an alternative to the current power-hungry method of creating bitcoins, some analysts suggest switching to Proof of Stake-based blockchain networks.

Instead of using power-intensive computers to create Bitcoins, a proof of stake miner depends on the percentage of stakes. Therefore, the energy consumed is negligible compared to mining Bitcoins.

Although the proof of stake network is energy efficient, it has not been adopted yet because the supply of coins will be constant, which can lead to high inflation rates and reduce the value of Bitcoins. With more people investing in Bitcoins by the day, the need to create new Bitcoins will continue to increase, meaning more energy consumption and its effects on climate will worsen.

Increasingly, bitcoin and crypto trading have seen a rise in popularity. Sites like bitiq.org are making this more accessible to beginners.