How to Make a Short Film – Flow Chart 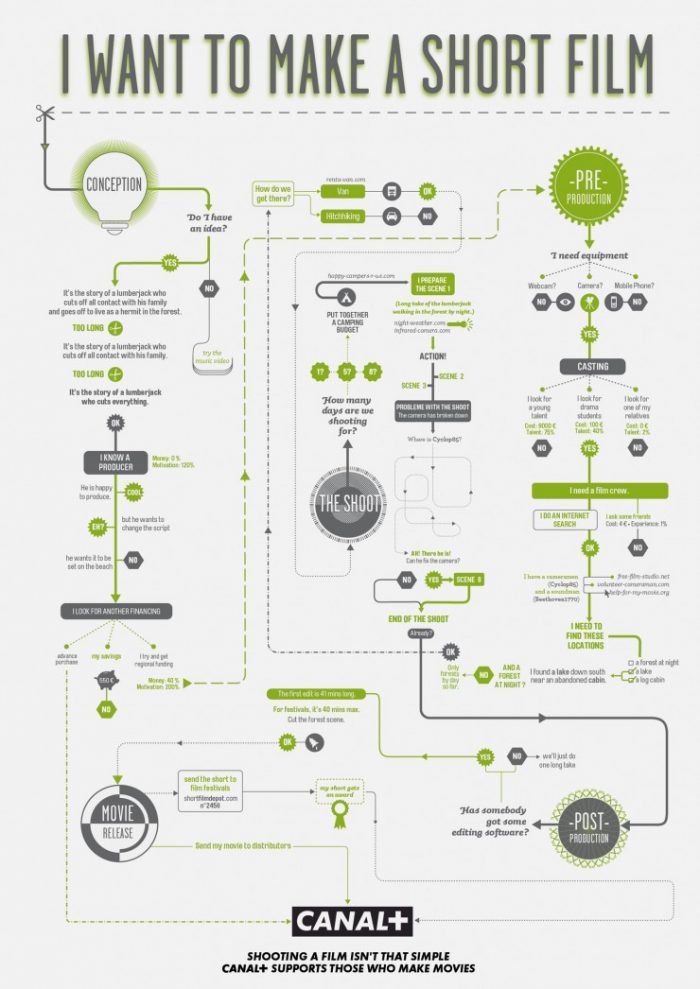 There’s probably a little voice in your head telling you to try your hand at making a movie. “You have awesome ideas”, or “You’re a really good storyteller” they probably say…

This visualization depicts the process of making a short film. While it’s a bit more complicated than you were probably expecting, it’s important to be extremely thorough in your planning of each step.

This is where you need the idea. Coming up with an idea is probably the easiest part of this whole process because it doesn’t require much work. We all have cool ideas from time to time, but to turn an idea into a work of art is a daunting process.

Another important part of the conception phase is finding a producer and financing for the film. No matter how small your film will be it is going to require some amount of money to put together.

This is where you get together everything you need to make the film. The main components are film equipment, casting and a film crew. It will take some time and planning to get everything and everyone on set at the right time to pull everything together.

How many days will you be shooting for? Where is everyone staying during the shoot? These are all important questions to address. Every minute is valuable during a shoot so having as much planned out and rehearsed as possible is a good idea.

This is where you edit the film, add music, transitions, and additional effects. The end result of this step will be a completed short film that is ready to be released.

You finally made it! The movie is ready to be sent to distributors and film festivals around the world. If everyone loves it you are on your way to being the next big shot director!