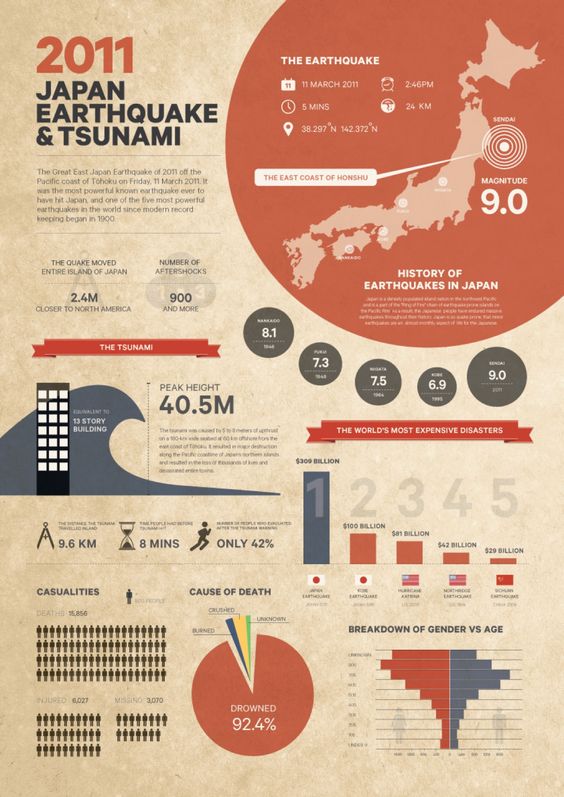 On March 11, 2011 an undersea megathrust earthquake occurred in the north-western pacific ocean. The epicenter was 45 miles east of the Oshika Peninsula of Tohoku Japan…

What is the Largest Earthquake Ever?

While the Tohoku Earthquake was not the largest earthquake ever recorded, it is the largest in the last 10 years by a sizeable margin. It is one of only 5 earthquakes to ever exceed a 9.0 magnitude.

The largest earthquake of all time occured in Bio-Bio, Chile in 1960. Known as the “Valdivia Earthquake” its magnitude was a 9.5.

In total there were 15,856 casualties in the Tohoku earthquake, with over 6,000 injuries and 3,000 people missing. The primary cause of death was drowning due to the huge tsunami created by the shock.

The tsunami is what did most of the damage in the case of the Tohoku Earthquake. The peak height of the tsunami reached 40.5 meters and caused flooding throughout the city. In total $309 billion in damage was done by the earthquake, more than 3 times as much as any other earthquake.

An interesting fact is the shock from this high magnitude earthquake actually moved the island of Japan 2.4 meters closer to North America.

Nuclear reactors require a constant supply of energy. When the earthquake happened, the normal power used by the nuclear plant were shut down, and the backup diesel generators kicked in. Everything was working as expected until the tsunami showed up and flooded the diesel generators, cutting off all power to the nuclear reactors. This loss of power lead to three nuclear meltdowns and resulted in the evacuation of more than 150,000 people from the surrounding areas.