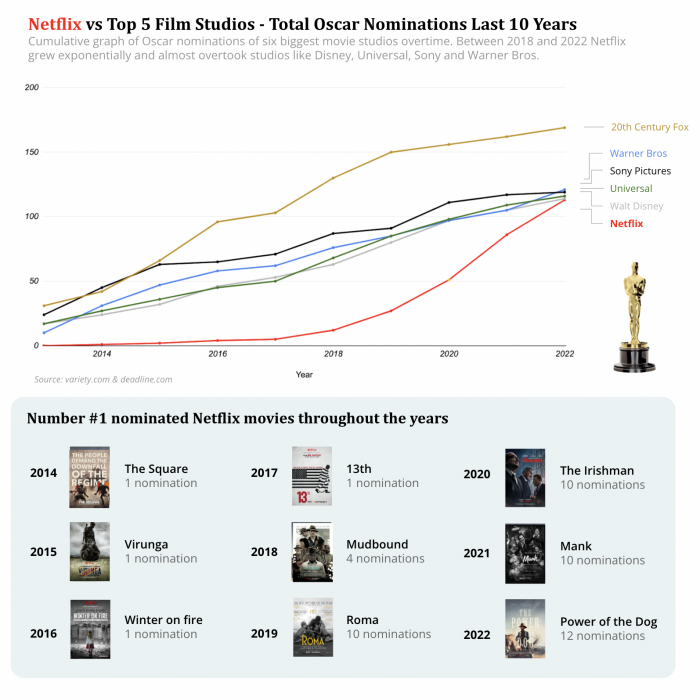 It’s no secret that Netflix has been taking the film industry by storm in recent years, but are they producing films good enough to compete with the greatest film studios of all time? This graph might shock you…

Netflix has been producing original films since 2012, but in recent years they have made a big push into the blockbuster film space. While they have had moderate success, with a handful of nominations from 2014 through 2018, it was their 2019 production Roma that let everyone know they were serious. While Roma came up just short of taking home the award for best picture, it impressed everyone with its 10 nominations and officially marked the beginning of Netlix’s invasion of the Academy Awards.

In 2020 they did it again with The Irishman. This Robert De Niro led film had another 10 nominations.

In 2021 Mank had 10 nominations. In fact, since 2019 they have had no fewer than 10 nominations from their leading film of the year.

In 2022 Netflix had their strongest showing yet with Power of the Dog getting 12 nominations, a record for the company. While they came up just short in their pursuit for the award for best picture, it seems like it is only a matter of time before Netflix takes home this prestigious award.

While much of the talk has been about Netflix and their impact on the film industry in the previous decade, another newcomer has burst on the scene in 2022 with a shocking best picture award win. Apple TV+ took home the grand prize this year with their hit film CODA. Could this be the start of a bitter rivalry between two upstart film studios, or will the traditional film industry giants continue their dominance in the years ahead?