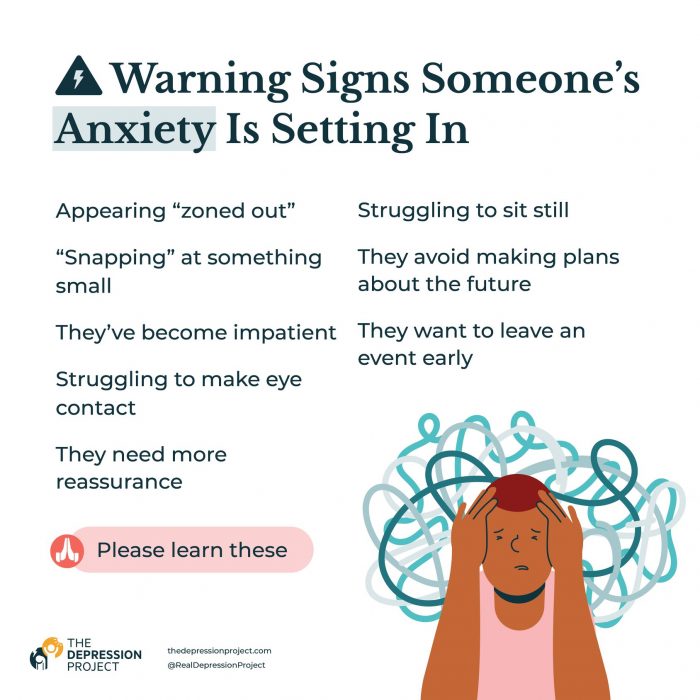 One of the most difficult parts of having an anxiety disorder is never knowing when it’ll show up. It strikes when you’re at work, in the car, even in your own home. For me, though, there are a few signs someone’s anxiety is about to take over. Sometimes they’re obvious; sometimes they’re more subtle. But if I pay attention to them, I can prevent a full-blown meltdown or manage my symptoms before it reaches that point. Here are eight signs that my anxiety is about to take over:

If they’re zoning out, it can mean a few things. They could be looking around the room and not paying attention to what’s going on. They might not respond to your questions or speak up if they have something to say (and are afraid of how others will react). If someone is zoning out at work or school, for example, this may be due to anxiety about their performance. If your friend or family member starts zoning out more often than usual, ask them if anything is wrong and see if you can help them feel better. If they say nothing’s wrong but continue to zone out regularly in different situations without any clear cause (like wearing bright colors), it may be time for you both to talk with a professional therapist

If you find your partner snapping at small things, this is a sign that their anxiety may be about to take over. They are trying to control the situation and their emotions by trying to control you, which is why they’re snapping at small things. This is also a sign that their anxiety has reached a point where it’s starting to affect them physically (you know, like with their mood).

For those who are close to a person with anxiety, it can be hard to separate your own feelings from theirs. This is especially true if you have an anxious personality yourself. If a loved one has always been patient, but suddenly becomes easily frustrated or annoyed by almost everything, it could be that their anxiety is about to take over. They get frustrated and annoyed easily. They want everything done now. They might be more irritable than usual.

If someone is struggling to make eye contact, it can mean that they are feeling uncomfortable in a situation or that they’re struggling with something internally. When someone isn’t looking you in the eyes, it’s typically because they don’t feel safe or comfortable around you. This can be an indicator of an underlying anxiety issue or another underlying problem that needs to be addressed. Not making eye contact may also indicate that the person feels awkward about something you said or did, so try not to take it personally when this happens.

If your partner is suddenly asking for reassurance, it’s probably because they’re feeling anxious. They might be insecure about something and want to make sure they aren’t going crazy. Or they might be worried that their feelings are irrational, so they need someone else to tell them they aren’t. If you notice someone in your life asking for more reassurance than usual, ask if there’s anything going on that might be making them feel this way—no matter how small or silly it seems to you. And don’t forget: It’s not just people with anxiety who have moments when their perceptions of reality don’t match up with what is actually happening around them!

A person who’s struggling to sit still is experiencing a common symptom of anxiety. They might be fidgeting, unable to keep still and constantly moving around the room.

They avoid making plans about the future.

If you’re struggling with anxiety and trying to figure out how to help, this could be a sign that your loved one is struggling with their own anxiety. The reason why they avoid making plans about the future is because it’s easier for them to stay in the present than think about what might happen next. They don’t want to think about the possibility of failure or disappointment or rejection, so they’re doing whatever they can do avoid it. One way you can help: Remind them that no one knows what will happen next, but if they make plans now and then follow through on those plans, then at least they’ll have tried. If nothing else comes out of those efforts (like failing), then at least there was an attempt made! Plus, being able to try will give them a sense of control over their lives—something many people suffering from anxiety lack entirely when faced with uncertainty.

They want to leave an event early.

They want to leave an event early. If you see someone looking at their watch or yawning while they’re at the party, it could be a sign that they are anxious and want to leave. If this happens after only an hour or two of being there, even though you’ve been having fun, it’s a good idea to take them seriously when they say they need to go.

You can pick up on anxiety in someone before it takes over.

You can pick up on anxiety in someone before it takes over. Anxiety is a response to stress, and it’s a normal one. However, when your friend or family member repeatedly encounters stressful situations and becomes overwhelmed by them (even if they’re not big issues), they might be showing signs of generalized anxiety disorder (GAD). GAD is different than regular old worry; it involves an ongoing state of tension and unease that can last for weeks or months at a time, with symptoms such as muscle tension, irritability and trouble sleeping. If you notice any of the following patterns in your loved ones — especially if they seem to be getting worse over time — reach out! It could be nothing serious, but it could also be something more serious like GAD affecting their lives negatively.

Anxiety is a real struggle for many people, and these signs will help you know what’s going on with the person you care about. If you recognize any of these signs in someone near you who struggles with anxiety, it might be time for them to step away from the situation and focus on themselves. But most importantly, don’t be afraid to reach out to that person and let them know that they’re not alone in how they’re feeling. A simple text message or comment can go a long way in lifting someone up who’s struggling with anxiety!