The Most Popular Fast Food by State According to Google 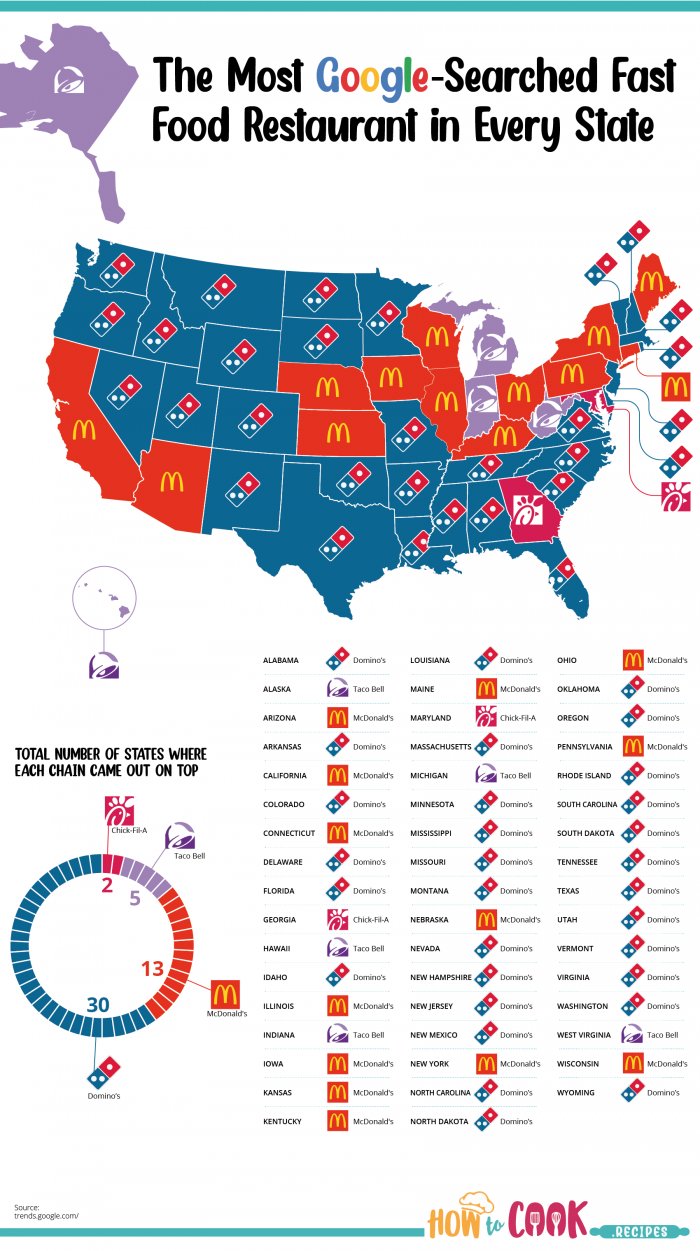 The USA is home to some of the most infamous fast food chains in the world. In most cities, you can hardly walk a block before you come across a McDonald’s, Domino’s, Taco Bell, or Chick-fil-A.

Given that many Americans frequent these restaurants, it’s no wonder they are increasing in number by the day. From burgers to chicken sandwiches to fried chicken, there’s a fast food restaurant to satisfy almost any craving. Below, we’re analyzing some data collected to determine the most popular fast food by state. Let’s get started!

Which Is The Most Popular Fast Food Chain In The US?

According to data from Google Trends, Domino’s is the most-searched-for fast food chain online. The pizza chain has gained immense popularity since it was established in 1960.

However, McDonald’s maintains the record for highest fast food gross sales — not a surprise, considering their massive expenditure on advertising. As such, it is considered #1 of all the most popular fast food restaurants. In 2020 alone, this famous restaurant generated sales of $19.21 billion, while Domino’s stood at a distant $4.12 billion.

What Are the Most Searched-For Fast Food Restaurants in America?

It is already evident from these staggering sales numbers that the US has its fair share of popular fast food restaurants, not to mention that Americans tend to hold very strong opinions about which fast food is their favorite.

However, we used Google Trends to determine which food chain is the most searched for online. This helps establish which is really most popular, irrespective of gross sales.

The winner of the popular fast food restaurant contest is Domino’s. This doesn’t come as a surprise because Domino’s is the biggest pizza chain globally in terms of revenue and the second largest in terms of stores opened. It was also among the first to start on pizza delivery, and they have since tried to maintain their iconic “30 minutes or less” delivery promise.

McDonald’s is the second most popular fast food restaurant. For almost 80 years now, McDonald’s has been at the center stage of the fast food business. Such a long-standing history gives the company some leverage in terms of sales, but Domino’s still surpasses it in terms of search volume.

Taco Bell then comes in third place. Considering Taco Bell was founded about 20 years after McDonald’s, and around two years after Domino’s, we can say it’s doing pretty well as the “new kid on the block.”

When you move to the southeast part of the country, it is evident that Chick-fil-A is the region’s most preferred fast food restaurant. Known largely for its chicken sandwich specialty, Chick-fil-A is another chain that is among the most popular in the United States. Chick-fil-A has shown immense growth since it was founded in 1946.

There are at least 2,769 Chick-fil-A locations in the United States, less than half the number of Taco Bell restaurants.

Pretty much all of these four top-ranking restaurant chains — Domino’s, McDonalds, Taco Bell, and Chick-fil-A — have found a home in the country’s most populated states, California, Texas, Florida, and New York. They truly have a massive foothold in the food industry in America.

When it comes to Domino’s, a majority of searches come from Florida and Texas. This is expected, given that the state with the most number of Domino’s Pizza restaurants in the US is Texas. There are 689 stores, a total of 10% of all Domino’s Pizza stores in the USA.

Which State Eats the Most Fast Food?

Central and southern states have far more fast food restaurants than states on the East or West coasts in the US. This makes sense, given that many of these restaurants started in the south.

The state of Alabama is certainly the one with the heaviest consumption of fast food. Alabama has 6.3 fast food restaurants for every 10,000 residents. Nebraska and West Virginia then follow with 5.4 and 5.3 restaurants per 10,000 people, respectively.

Fast food restaurants have long been a staple — and an obsession — of American history, and their popularity persists today. Domino’s and McDonald’s are among the country’s most-searched-for fast food chains, and they also have some of the highest grossing sales in the country. Just behind them are Taco Bell and Chick-fil-A. The infographic above includes a breakdown of the most popular fast food by state, including these two fast food titans.