The Periodic Table of Fictional Elements 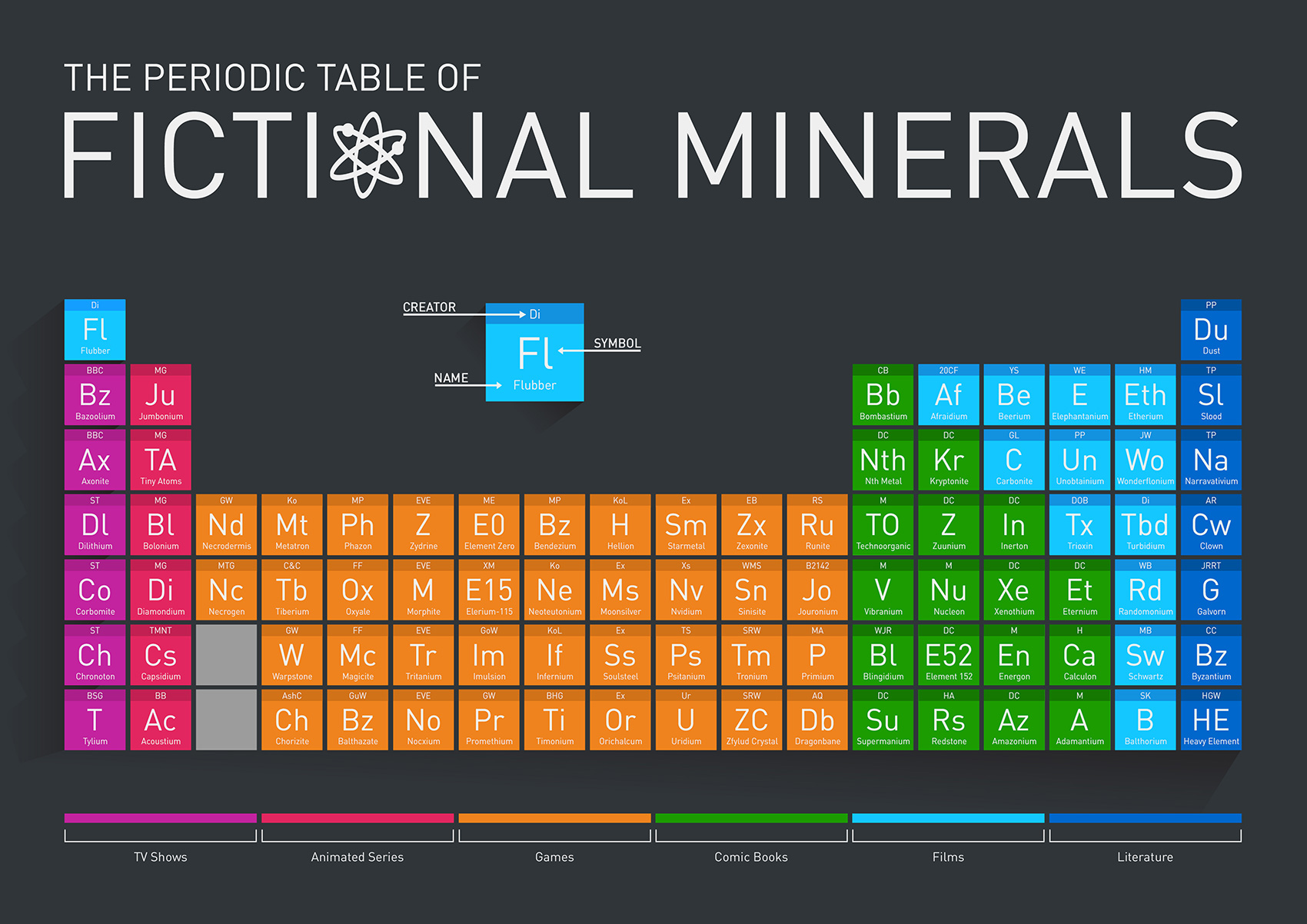 The science fiction and fantasy genres are full of interesting materials with otherworldly properties. Some rob heroes of their powers, some supply power to futuristic machinery, and others exhibit fantastic qualities that add fun and flavor to our favorite stories. It can be difficult to keep track of all the creative fictional elements in popular media, and that got us thinking; if only there were a way to organize a set of elements.

In real life, the elements are organized in the periodic table by the number of protons they have. Unfortunately, fictional elements are rarely described in enough detail to use the same organizational scheme as real elements. Instead, we can organize and discuss fictional minerals by the type of media they come from.

Here is a fun periodic table of fictional elements, along with a brief summary of some of the most popular imaginary substances from television, games, comics, and movies. Some entries may contain spoilers for the source material, so be careful if you haven’t seen, read, or played everything on the list! Alright, on to the fictional periodic table.

Axonite: Kicking off our exploration of fictional minerals, we have axonite from Doctor Who. Axonite possesses the miraculous capability of replicating any other substance in the universe. It is a living, conscious molecule that must spread to reproduce.

Chronoton: A time-manipulating element first introduced in Star Trek that allows users to control or halt the flow of time. It also appears in other franchises, most notably Futurama and Teen Titans.

Dilithium: This crystalline fictional mineral comes from the Star Trek universe. It powers the Enterprise’s warp engines, giving the crew the ability to travel through outer space faster than the speed of light.

Acoustium: A metallic element from Batman Beyond episode Shriek. Acoustium was used to power a sound-generating device with enough energy to destroy entire buildings.

Capsidium: In The Teenage Mutant Ninja Turtles cartoon, capsidium is the power source for the main villain Krang’s mobile lair, The Technodrome.

Diamondium: In Futurama, diamondium is the hardest substance in the known universe. The only possible harder substance — diamondillium — is suspiciously similar, and the characters in the show suggest it could be the same fictional element under different names.

Orichalcum:  First mentioned by Plato, orichalcum is one of the oldest and most famous fictional minerals. References to orichalcum litter ancient Greek mythology and Roman stories, and it has maintained its popularity into modern times. Countless video games use orichalcum as a rare all-purpose element with fantastic properties. The Final Fantasy, Elder Scrolls, and Kingdom Hearts series make up just a small sampling of the video game franchises that use orichalcum in some capacity.

Runite: Runite is a light blue metal found in the MMORPG game Runescape. It is one of the most common armors in the game, with its strength offering a significant advantage over other substances like mithril and adamantine.

Warpstone: Warpstone is an extremely powerful and highly unstable crystal from the expansive Warhammer universe with numerous unusual properties. It is magic in solid form and possesses incredible capabilities like transmuting metals and powering machinery and weapons.

Adamantium: In Marvel Comics, Wolverine’s skeleton and claws are made from the fictional element adamantium, a steel alloy many times stronger than traditional steel. It is a virtually indestructible metal with unparalleled density, making it an excellent choice for crafting armor and weapons.

Kryptonite: Perhaps the most famous fictional element of all, Kryptonite is a radioactive element and Superman’s one true weakness. Created by DC comics, kryptonite is an alien element created during the destruction of Superman’s home planet, Krypton. It can also be synthesized in a laboratory. Exposure to green Kryptonite renders Superman and other Kryptonians powerless, leaving them susceptible to attack. Given the popularity of Superman, this is one of the most recognizable elements on this periodic table.

Vibranium: In the Marvel Cinematic Universe and Marvel Comics, Captain America’s shield and Black Panther’s suit are made of vibranium, an incredibly strong metal of extraterrestrial origin. It absorbs kinetic energy and vibrations, making it the best choice of material for armor and defensive weapons, like shields. Vibranium is sometimes called anti-metal, Vibranium-B, or Plunderstone. It is easily one of the most famous fictional metals.

Carbonite: When Darth Vader needed a way to transport Luke Skywalker to Emperor Palpatine, he decided that freezing him alive in carbonite was the best option. Since he couldn’t afford to risk killing Luke, he tested the freezing mechanism first on Han Solo in one of the most memorable scenes from The Empire Strikes Back. Han Solo frozen in carbonite is one of the most iconic images from the Star Wars franchise.

Flubber: Flubber is a 1997 cult-classic movie starring Robin Williams and featuring the sentient fictional substance flubber. The term flubber is a portmanteau of “flying rubber” used to describe the chaotic behavior of the experimental material.

Unobtanium: Unobtanium has appeared in many fictional works as a go-to name for any rare element, or powerful substance. Recently, it was the driving force that powered the plot of James Cameron’s Avatar movie. In that movie, unobtanium was a high-temperature superconducting metal mined from the planet Pandora. It was needed to supply power to ships for interstellar travel.

Dust: Dust is the basic unit of consciousness from the His Dark Materials series by Philip Pullman. Dust is sometimes called Rusakov Particles after the scientist Boris Rusakov who played a key role in dust’s discovery.

Galvorn: Galvorn is a fictional metal from J.R.R. Tolkien’s Middle Earth. It was first mentioned in The Silmarillion, where it was described as being harder than Dwarven steel but malleable enough to be easily used to craft weapons and create armour. In the Lord of the Rings series, Galvorn was also used to create armor and weapons that reflected only the light of the moon.

Slood: Rounding out our fictional periodic table, we have slood, one of the more unique fictional materials on this list from the Discworld series by Terry Pratchett. It is only discoverable by conscious, intelligent beings, sort of akin to fire. Harnessing slood requires surpassing a certain intelligence threshold which the humans who inhabit Roundworld have yet to do.