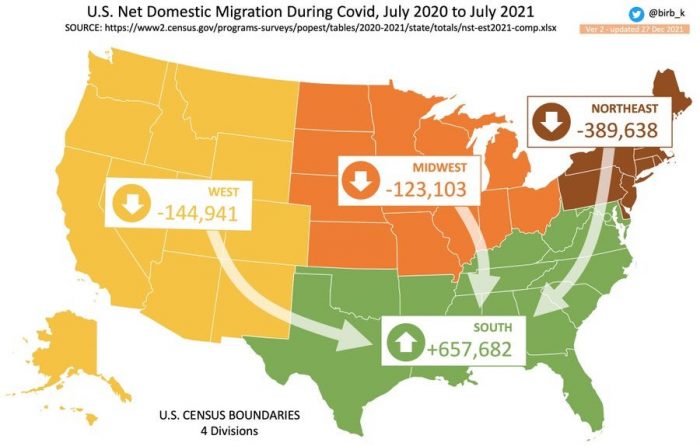 Domestic migration in the United States has been a big topic for the last few years. More people are moving because of the pandemic, as well as heightened political division. Here are the shocking numbers for 2021…

With a shift to work from home, the importance of living in a big city has decreased in the past 2 years. This has people leaving the coastal mega cities like L.A, San Francisco and New York. Shockingly, the only region with a net positive flow of people over the past year is the South, with a population growth of nearly 700k.

The big areas people tend to be moving to are Texas and Florida. Some of this is due to lower (or no) state income tax, as well as more relaxed governmental regulations in general.

The Northeast is the big loser in all of this. While people are moving out of the big cities in California, at least the weather is nice out there. The Northeast doesn’t have as much going for it outside of it’s sprawling metropolises. For this reason you see the Northeast with the largest net decrease in population.

These numbers are important because population growth generally means greater economic growth for the region and better economic opportunities for the residences of these areas. Population growth leads to an increase in demands for homes in the area, as well as an increase for goods and services. The economy of any given area thrives on growth, and the South looks to be well positioned to take advantage of this moving forward.

Here is a look at where American’s moved in 2020 for comparison.

It would be interesting to see a more granular look at this data. This data is provided by the US Census, which breaks the country down into these 4 regions, so that is what we have to go on for now. It will be interesting to see what happens over the next decade. Will these trends continue or will we see a reversal, with people once again flocking to major US cities?