Visual Guide To The Differences Between A Psychopath And A Sociopath 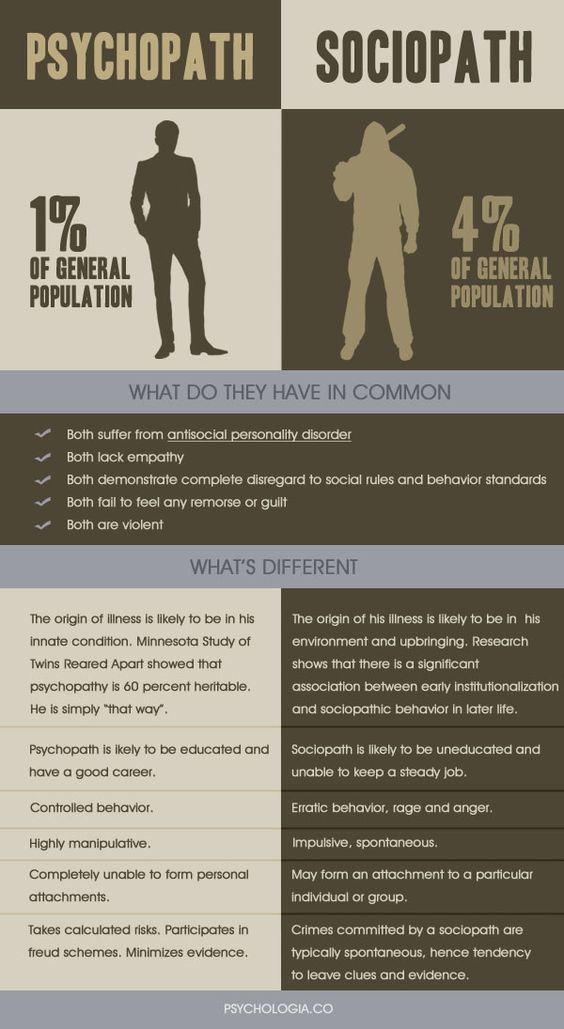 The failure to feel remorse and guilt is one of the most common and alarming traits of people with these disorders. Both psychopaths and sociopaths are impulsive, lack empathy, have shallow emotions, hate authority, don’t accept responsibility for their actions, are grandiose, have poor behavioral controls, and lack realistic goals.

You may have noticed the chameleon theme emerging from our guide so far. Well, it’s important to remember that psychopaths are not only highly manipulative and very good actors, but also excellent social chameleons. While sociopaths are often shy and incompetent in social situations, you’d be surprised at how well psychopaths can blend in.

They can mimic all sorts of emotions, which makes them seem very sincere, especially when they’re trying to fit in with a particular group or get themselves out of trouble. Their ability to mimic means they can pick up accents and languages easily too. They may take on the speech patterns of their friends or colleagues deliberately because they know that if they sound like everyone else around then, then people will more likely trust them (for example a British banker who uses a Cockney accent when he goes down the pub with his drinking mates).

Sociopaths are without empathy or remorse for their actions.

Sociopaths have no moral compass. They have no sense of right or wrong, and they are unconcerned with the impact that their actions have on others. A sociopath might do something seemingly sweet simply because it makes them look good in front of others, not because they actually care about you.

The term sociopath is typically used in reference to people with anti-social personality disorder (ASPD).

The term sociopath is typically used in reference to people with anti-social personality disorder (ASPD). The defining features of ASPD are a lack of conscience and an impaired ability to feel guilt, remorse or empathy.

An October 2013 article in “Psychology Today” describes this difference between sociopaths and psychopaths as the difference between people who are bad versus those who are mad. This distinction is important because it helps determine treatment options for sociopaths. While there isn’t yet a cure for psychopathy, some sociopaths can learn coping skills that help them lead more productive lives.

Sociopaths have no qualms about harming others, but they don’t enjoy it the way a psychopath does.

A psychopath doesn’t always behave violently. Most psychopaths can control their behavior, unless they are angered or feel they are threatened. They can charm and deceive others, and are often very good at it. A psychopath might even be able to fool a professional psychologist with his act.

A sociopath also has no conscience about hurting others, but he is much more impulsive. He may commit a crime without thinking it through beforehand or be violent without considering the consequences. If a sociopath harms someone during an outburst, the sociopath will not feel guilty about it later on.

It’s important to know how to tell the difference between these two personality disorders so you can better deal with people who exhibit these traits.

Sociopaths have a sense of entitlement, a pathological lying ability, and difficulties with reality testing. They have a skill for manipulating others and taking advantage of them. They typically feel that they are more intelligent than others, although they may not be.

Psychopaths are flat-out malicious and believe in extreme forms of violence. They may appear to be charming and manipulative at first glance, but eventually become callous and cold and treat everyone like dirt.