What Causes Global Warming? (How Climate Change Is Affecting The World!) 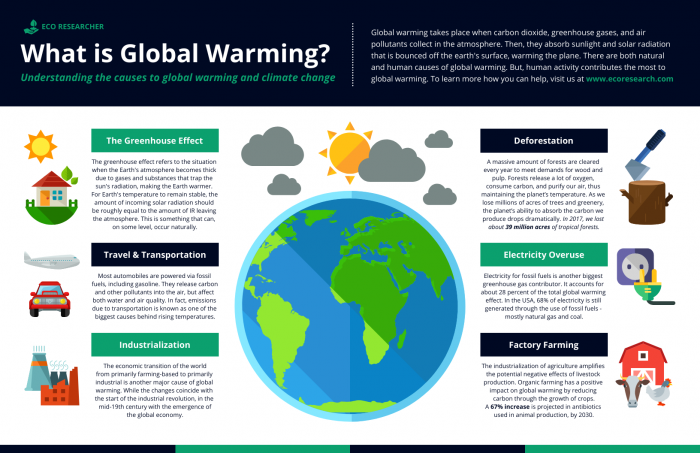 The greenhouse effect is a natural process that keeps the earth’s temperature at a level that supports life. The atmosphere lets in light from the sun and traps heat on the planet. This process makes it possible for plants, animals and human beings to exist. The greenhouse gases in our atmosphere are composed mainly of water vapor, carbon dioxide and methane, with smaller amounts of nitrous oxide, ozone and fluorinated gases. These gases are vital to keeping our planet warm enough to sustain life.

Travel and transportation are responsible for roughly 14% of global greenhouse gas emissions. Travel and transport have been implicated in every single aspect of global warming, from the extraction of fossil fuels to the end use of petroleum products as fuel. Transportation is responsible for a vast amount of the world’s greenhouse gas emissions. The most common greenhouse gas emitted from transportation sources is carbon dioxide (CO2). As a general rule, CO2 gets produced when we burn carbon-based fuels like coal or oil (such as gasoline). The amount of CO2 released depends on how far you travel, how much energy your vehicle uses during your trip (fuel economy), and how much energy is required for other activities during your trip.

Industrialization refers to a set of societal changes that occur when a society moves from producing primarily goods to producing services, as well as goods. This type of change is typically associated with large-scale urbanization and the development of new technologies, such as cars and airplanes, which have significantly contributed to climate change.

Industrialization has contributed significantly to climate change by causing high levels of air pollution. These pollutants have damaged the ozone layer, which protects the Earth’s surface from harmful ultraviolet rays from the sun. As a result, more heat is now trapped in the atmosphere, leading to rising temperatures worldwide—known as global warming—and melting polar ice caps. The effects are already evident in some parts of the world: for example, in 2019 alone we saw record-breaking heat waves across Europe and North America and saw the first tropical cyclone ever recorded in Greenland’s history

Deforestation is the cutting down of trees, the loss of forested land. Often, it’s a result of commercial logging. When people clear forests to make way for farms or cities, that’s deforestation too. Deforestation is problematic because it hastens global warming (because plants’ ability to absorb carbon dioxide is reduced), leaves wildlife without their natural habitat and can contribute to soil erosion. As more land gets converted into farmland or cities, less carbon stays in the soil and more carbon dioxide gets released into the atmosphere.

How the effects of global warming are affecting the world

Sea levels are rising, this is because seawater expands when it’s warmer and because melting ice adds to the water. The warming climate is causing weather patterns to change. Ice caps are melting faster than ever before. . Weather events like intense hurricanes are becoming more common as the oceans continue to warm, fueling storms with increased energy. As temperatures rise, there’s an increase in forest fires because dry conditions create tinderboxes in western forests (and beyond). Smoke from these fires travels across the country, affecting people who live far away from where a fire started.

One Way to Help Stop Global Warming Is to Plant Trees

Our planet’s climate is changing, and we need to do something about it. The simplest, most effective step we can take is to plant trees. Despite what you may have heard, planting trees won’t stop the effects of global warming—in fact, forests are some of nature’s best carbon sinks.

If you want to help clean up the world through your own backyard, you don’t have to wait until you’re older or more mature; seeds are easy enough for anyone to start planting at home today. As an added bonus, by starting a tree program in your community, you’ll be helping not only yourself but also generations of people who will come after you!