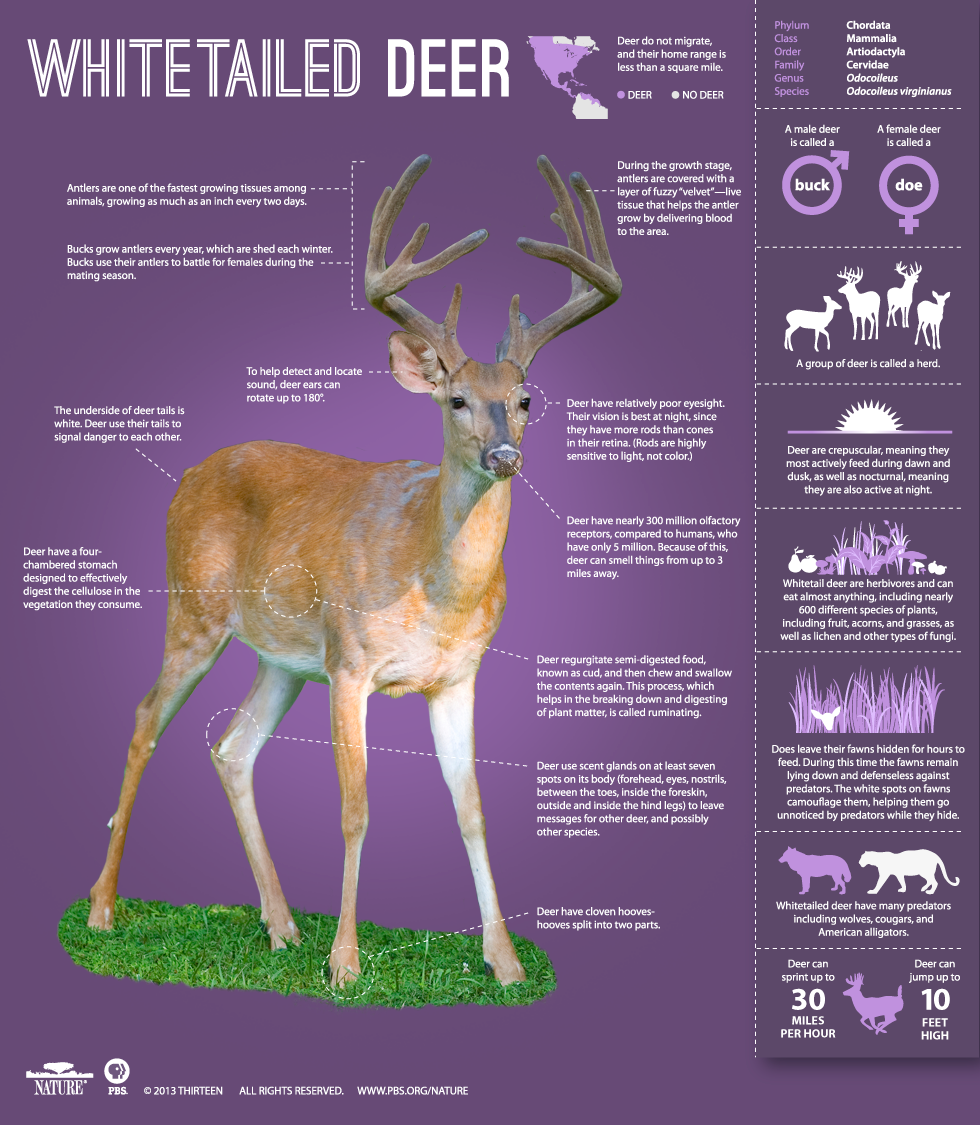 If you’ve identified a wild deer that frequents your property or have taken in a pet deer, it’s only natural you’ll want to find the perfect name for them! The infographic and facts below will help you learn about your new furry friend, and our lists of deer names will help you name them!

Below, you’ll find some interesting and little-known facts about deer to help you learn about your new wild friend or cuddly pet!

White tailed deer are easily identifiable by the white coloration on the underside of their tails. Male deer grow antlers each year and shed them in the winter, while does — the word meaning “female deer” — never grow antlers.

Deer have incredible hearing that alerts them to their many predators, but their eyesight during the day is lacking. They see much better at night, which allows them to stay alert when some predators are on the prowl.

Deer have eyes on the sides of their head, giving them a massive range of vision. Although their eyesight is relatively poor, they can see an incredible 310 degrees at all times! For comparison, humans can see a bit less than 180 degrees in front of them.

Deer are herbivores, meaning they only feed on vegetation. Like many other mammalian leaf-eaters, they have multiple stomachs to help digest food, and they often regurgitate partially digested food to continue chewing.

Deer are the most hunted big game animal in North America. This is partially due to the fact that, without many natural predators in the country, the population of these animals is rapidly increasing.

Hunters also seek out deer as prey because much of the animal is useful. The deer pelt can be used for decoration or to make warm clothing or rugs, and much of the meat can be consumed. Edible deer meat is called “venison.”

Deer are some of the only animal species to grow antlers. Deer antlers have tiny, hair-like structures on them that are actually living tissue and not fur. The tissue helps keep the antlers supplied with oxygenated blood for accelerated growth.

Deer antlers are made of one of the most rapidly growing tissues in the animal kingdom. They can grow about a half inch every 24 hours!

Deer antlers have been used by humans for thousands of years. They’re useful for decoration, knife handles, furniture legs, and more.

Every deer species has antlers except the water deer, a species indigenous to Asia. Water deer usually have massive teeth that can grow to over three inches long!

A fawn, or baby deer, is born without a scent. This lack of a scent helps protect them from predators until they’re older and can fend for themselves.

Fawns also remain protected from predators because they are born with white spots. These act as a natural camouflage that keeps them hidden as their parents go off to search for food.

Below are some of the most common deer species along with their continent of origin:

In Finland, “your mother mates with reindeer” is a classic insult. Check out this infographic for more insults from other countries.

Bambino – the Italian word for “baby”

Roe – a species of deer

Bullwinkle – referring to the moose from Rocky and Bullwinkle

John Deere – a tractor company and funny name for a deer

Whitey – referring to the tail of a whitetail deer

Bambi – from the Disney movie, Bambi

Sven – from the Disney movie, Frozen

Holly – from Winnie the Pooh

Comet – from the movie, The Santa Clause