What Happens to the Human Body in Space? 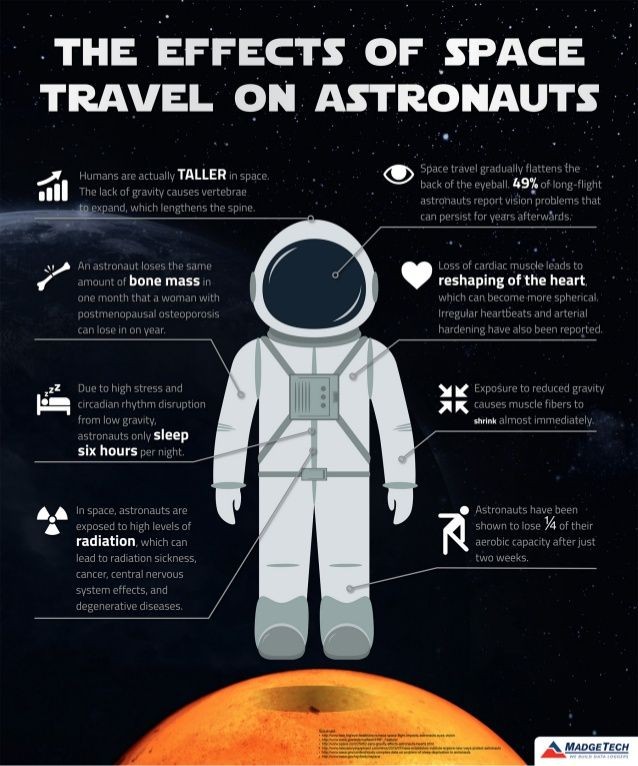 You’ve likely seen space movies like Apollo 13 or Hidden Figures, or less realistic films like Interstellar, Gravity, and The Martian. While watching these movies, you probably find yourself thinking: what happens to the human body in space? Most fictional movies and even those based on true stories don’t discuss the severe effects space travel can have on humans.

The infographic above will give you a quick idea of the many adverse effects space exploration has on humans. Below, we’ll dive further into how humans react to space flight and the lasting effects astronauts often experience.

How Does Outer Space Affect the Human Body?

Once you get outside of the earth’s atmosphere and gravitational pull, conditions get quite extreme. Astronauts who orbit the earth or travel to the international space station (ISS) face several challenges along the way.

The further you get from the earth’s surface, the less intense its gravitational pull becomes. Low gravity has been shown to have some disparaging effects on humans.

Most importantly, the absence of the gravitational pull our bodies are designed to cope with instantly leads to muscle degradation. On earth, we need to fight gravity constantly, but in space, our muscles don’t have to work as hard.

The heart, which is primarily muscle, can change shape, and skeletal muscles lose density very rapidly.

Most astronauts get taller in space because gravity isn’t compressing their spine, and the reduced strain on muscles leads to a dip in cardiovascular capability. When returning to earth, astronauts will get shorter and get winded more easily.

The earth’s atmosphere and magnetic poles protect us from space radiation when we’re grounded. However, space travelers only have their spaceships to safeguard them. Higher rates of radiation exposure in the space environment lead to a myriad of issues for astronauts.

Those exposed to radiation for extended periods often get sick, experiencing headaches, vomiting, nausea, and shortness of breath. In more severe cases, astronauts might experience confusion, minor visual hallucinations, and an increased risk of cancer.

Traveling in space is often very isolating, even if fellow space travelers are on board. Astronauts go through extensive training to be able to cope with the emotional and mental changes they face when on a space mission.

The National Aeronautics and Space Administration (NASA) reports that depression and anxiety are leading concerns for astronauts. These conditions are attributed mainly to changes in circadian rhythm, high levels of stress, and lack of sleep. Constant changes in light exposure on the spacecraft and in the space station can also influence an astronaut’s sleep schedule and circadian rhythm.

Most astronauts report that they only get around 6 hours of sleep per night, which can lead to sleep deprivation symptoms over long periods.

Anxiety during space travel often comes from the high-stress environment, a lack of sleep, and the constant requirement for careful calculations and critical thinking.

Changes in Sight and Balance

Astronauts experience low gravity and exposure to different gravitational fields when traveling in space, depending on the mission. These changes can have semi-permanent effects on vision and immediate changes in balance and coordination.

Experts have found that space travel gradually flattens the back of the eyeball, which can lead to severe vision issues. Nearly half of all astronauts have reported vision degradation as a direct result of their space travel.

When coming back to earth after space travel, the body needs to get accustomed to the forces of earth’s gravity again. Adapting to low gravity and then again to the earth’s gravitational pull can have short-term effects on humans as well.

Many astronauts report difficulty balancing back on earth, reduced hand-eye coordination, and a phenomenon called “space motion sickness.” Getting reaccustomed to earth’s gravity can take several hours or even days after landing.

Changes in Blood Volume and Circulation

Finally, the low gravity setting in space puts significantly less stress on the heart since it has less force to work against. The human heart will naturally atrophy in space.

When returning to earth, the heart will need to get used to pumping blood against the force of gravity once again. If the space travel is long enough — especially for those astronauts who have spent time on the space station — this process can take several weeks or longer.

Consequences of poor circulation include reduced cardiovascular capability and dizziness. The most severe issue with reduced circulation from space travel is orthostatic hypotension, which is a pooling of blood in the lower body if the heart fails to pump hard enough to circulate to the brain. The long-term effects of decreased circulation can be fatal.

Wrapping Up: Space Travel and the Human Body

As privatized space exploration continues to expand and we set our sights on future deep space missions, more and more people are bound to wonder what effects space travel has on the human body.

Thankfully, most side effects related to space travel are short-lived and dissipate within a few days or weeks of returning to earth with proper post-trip training and medical guidance.