Aha Moment Examples… How Some of the Best Ideas Were Born 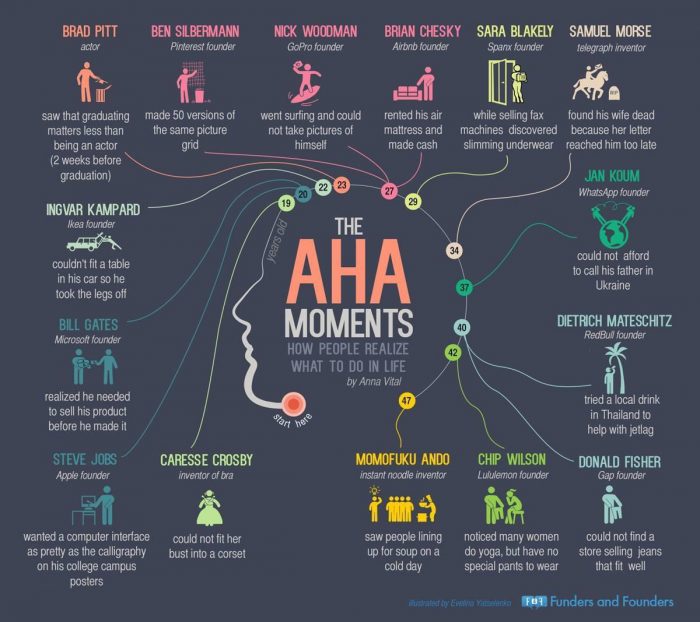 When we look at large companies and corporations, it’s easy to forget that they started out much smaller. Some of the most interesting origin stories for companies begin with an “aha moment,” a sudden spark of inspiration or creativity that eventually turns into a massive company.

Below, we’ll be taking a look at some aha moments examples from companies that have grown from a single, simple idea into something much larger.

What Is an Aha Moment?

An aha moment is a sudden realization that usually leads an individual or company to create a popular product or service. Far down the road from the idea’s conception, paying customers acknowledge the value of the fully-developed product, and the rest is history!

What Are Some of the More Famous Aha Moment Examples?

Now, let us look into some aha moments from some well-known products and companies.

The Ikea Foundation came from a eureka moment that the founder, Ingvar Kampard, had. A customer had bought a table from a furniture store where he worked, but the store’s worker could not fit it in the customer’s car. He then dismantled the legs to adjust the table to fit into the car. After the employee discussed the event with Ingvar, he developed the Ikea company’s most valuable insight: modular furniture makes home decor more accessible.

Modular furniture is a set of separate entities of furniture that users can assemble in different patterns. In turn, it serves to fit in your space as per your liking, and it’s easy to transport and assemble. Ingvar’s aha moment has made Ikea one of the largest international companies.

Dietrich Mateschitz, the founder of Red Bull, travelled to Thailand for vacation. Upon his landing, he experienced some jet lag symptoms. Consequently, he decided to try out a local drink to cure the jet lag.

Rather than buying coffee, he bought a concoction of caffeine, ginseng, and guarana that truck drivers used to stay focused and alert. Thus, the idea for Red Bull was born. When he got home, he quit his job selling toothpaste to found Red Bull with a co-partner. He now owns 49% of Red Bull and has a net worth of $24.4 billion; all from a single aha moment.

Unlike the previous stories, Samuel’s idea transpired from a misfortune. Samuel’s wife had sent him a message during her childbirth procedure. Unfortunately, the telegraph inventor got his wife’s message late, and she died of a heart attack before he reached home.

This uneventful scene drove Morse into co-developing the Morse code and the telegraph machines used to transmit messages rapidly over long distances.

Steve Jobs created his hardware concept based on a poster he had seen in school with beautiful calligraphy. He fell in love with type setting and decided he wanted a computer with native hardware and software that would allow text on screen to be just as beautiful. Thus, Apple, one of the most valuable companies in the world, was born. A simple look at their customer feedback and the number of new users of Apple products each year demonstrates just how valuable this aha moment was for Jobs!

Caresse Crosby invented the bra at 19 years old, when she found that her bust would not fit into a standard corset. The Caresse Crosby bra was worn like a halter top, and she initially did not realize that other women would want to wear such garments. Of course, we now know that this simple aha moment turned into one of the most prevalent under garments available today.

Airbnb is one of the aha moments derived from a much smaller business idea. Together with his roommate, Brian Chesky rented out their air mattress and living room to serve as bed and breakfast. The two were broke and couldn’t even raise money for rent, so the idea of renting out their space seemed like a valuable option.

After this success, Brian Chesky decided to go big with this idea. That is how the world’s largest short-term rental company came to be. They now run a website that’s so popular that user onboarding is almost automatic, and new users join the platform on a daily basis.

The famous messaging and call platform WhatsApp also emerged from an aha moment. Jan Koum, the founder of WhatsApp, thought of this application when he wanted to call his father in Ukraine but could not afford it due to the high international call rates.

At the time, Koum was a programmer. Following his idea, he approached Facebook, who rejected him. He then decided to start building the concept from scratch, and we’re now all familiar with his creation. The nearly free messaging platform makes user onboarding almost automatic.

Ando got this aha moment after seeing a group of people in line waiting to be served soup amidst the cold weather. This was a time when most of Japan faced post-war poverty. Momofuku then thought of the convenient idea that would keep people warm and help feed them.

Even though Ando Momofuku did not initiate the idea at that moment, ten years later, he embarked on this invention. Instant noodles are now a staple popular food option throughout the world.

We all aha moment examples where we realize that a simple idea could become massive if we develop it further. While they might seem inconsequential, countless business revolutions come from aha moments. Next time you get an aha moment, feel free to use this infographic for inspiration for what it could become!