What Percent of People are Left Handed? 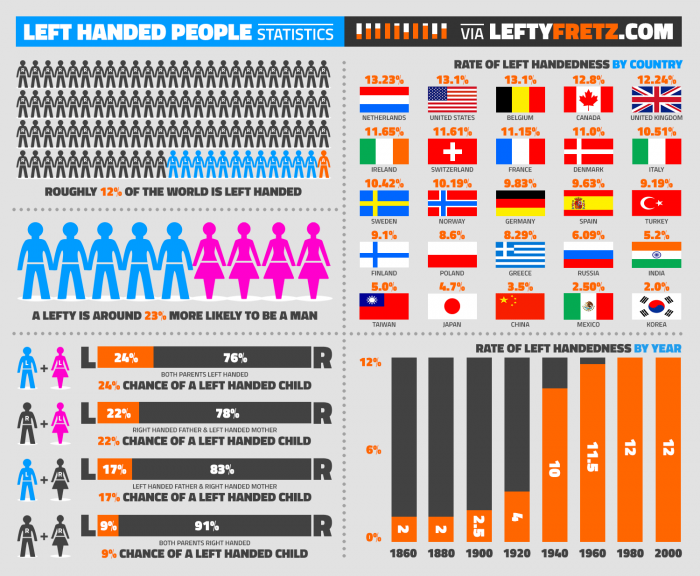 What percent of people are left handed in the world? You’d be shocked to find out how much this varies by country, gender, and by year…

Roughly 12% of the world is left handed based on the most current data. Would it shock you to learn that this number has been slowly increasing each year since we started tracking?

Are Men or Women More Likely to be Left Handed?

A lefty is 23% more likely to be a man than a woman. While this isn’t fully understood, it is believed that testosterone may accelerate the right hemisphere growth in the brain, which could lead to more left-handedness.

Which Country Has the Most Left Handed People?

In general, European and Anglo-American countries have significantly more left-handedness than the rest of the world. In fact, the top 14 countries on the list fall into this category. It isn’t until the #15 ranked country, Turkey, that an exception is found.

Is Being Left Handed Genetic?

Great question. We don’t have a solid answer on this at the time although there definitely seems to be a genetic component to it. For instance, if both of your parents are left handed you have a 24% chance of being left handed. More than double the worldwide average.

What I find to be the most interesting data point here is that the frequency of left-handedness has been increasing each year since the 1860’s. This could have to do with better tracking and record keeping, or it could be caused by other environmental factors.