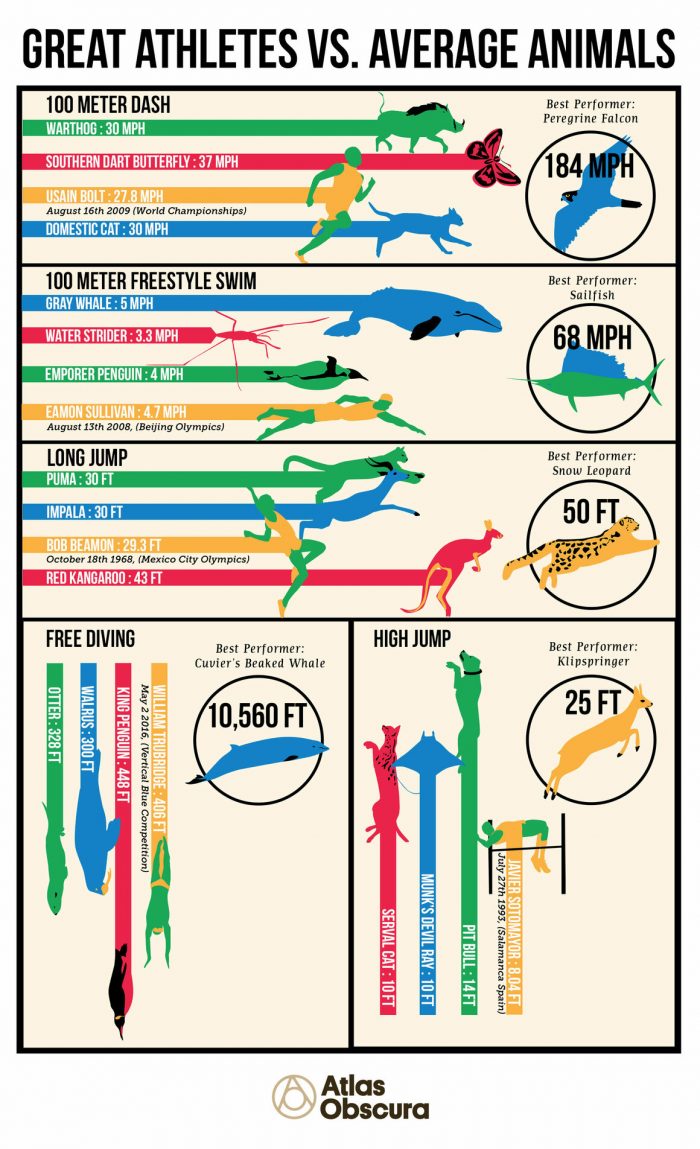 Humans really can’t compare to the top end speed of animals… but how do they stack up against average animals? Can we outrun a warthog? Can we outswim a penguin?

It’s truly incredible how physically underwhelming humans are when stacked up against the rest of the animal kingdom. In this graphic we can see comparisons in the 100 meter dash, 100 meter swim, long jump, high jump and free diving.

The fastest recorded human run speed was Usain Bolt at 27.8 miles per hour. Compare that to the average warthog who can run at 30 miles per hour and you’ll quickly realize humans aren’t the most gifted of runners. While we make up for much of that with agility, our straight line speed is not one of our strengths. Compare that to the peregrine falcon, who can fly close to 200 mph!

In swimming we fare a bit better versus the average animal, but still come up short of the fastest swimmers. We can compete with the emperor penguin, the gray whale and the water strider. Humans fastest recorded swim speed is 4.7 mph. The sailfish does a tab bit better than that, clocking in at 68 mph.

Humans are among the weakest in the jumping sports. Our best long jump is just under 30 feet and our best high jump is 8 feet. Just about any feline will be able to top both of these numbers. The snow leopard is the best performer in long jumping with an incredible distance of 50 feet. The klipspringer, a small antelope, has a high jump of over 25 feet which is a lot for this cute little guy.

While brain power is not something we can easily measure, humans would definitely come out on top if we measured our performance against the best animals. So while we are physically lacking relative to the rest of the animal kingdom, we have our intelligence to fall back on!