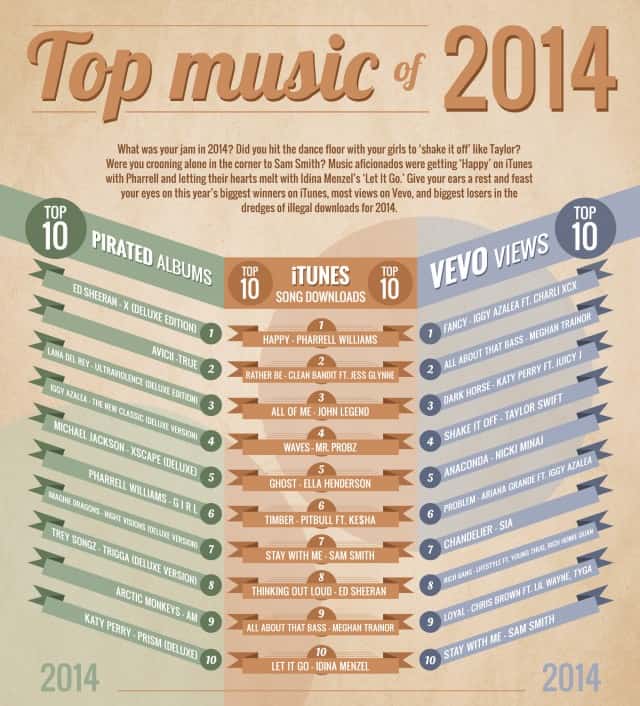 With the conclusion of the 57th annual Grammy Awards last weekend, 2014’s musical year is officially at its conclusion. New artists like Sam Smith emerged on the scene, and exposed the music business’s inherently murky nature after the 22-year-old pop singer was sued by Tom Petty for similarities between his Grammy Award-winning single, “Stay With Me” and Petty’s vintage classic, “Won’t Back Down.” Singer-songwriter and producer Beck shocked the world (well really, just Kanye West’s world) after beating out Beyonce for Album of Year with his 12th studio album, Morning Phase.

The Vevo and YouTube worlds were again preoccupied with tapping into contemporary pop culture’s sexual perversions. Nicki Minaj’s “Anaconda,” Iggy Azalea’s “Fancy,” and Meghan Trainor’s “All About that Bass” dominated viral music video charts, all placing in Vevo’s Top 10 Most Viewed Videos of 2014.

As a whole, I’d say it was a good year. Kanye West continued to exhibit he has an ego larger than the entire state of Texas. Young pop stars (Sam Smith, cough, cough) remained tainted in the media’s eyes for stealing tricks from the greats. And, oh yes… Sex continues to sell. What did you think of 2014?