9 Types Of Non-Verbal Communication You may Not Know About 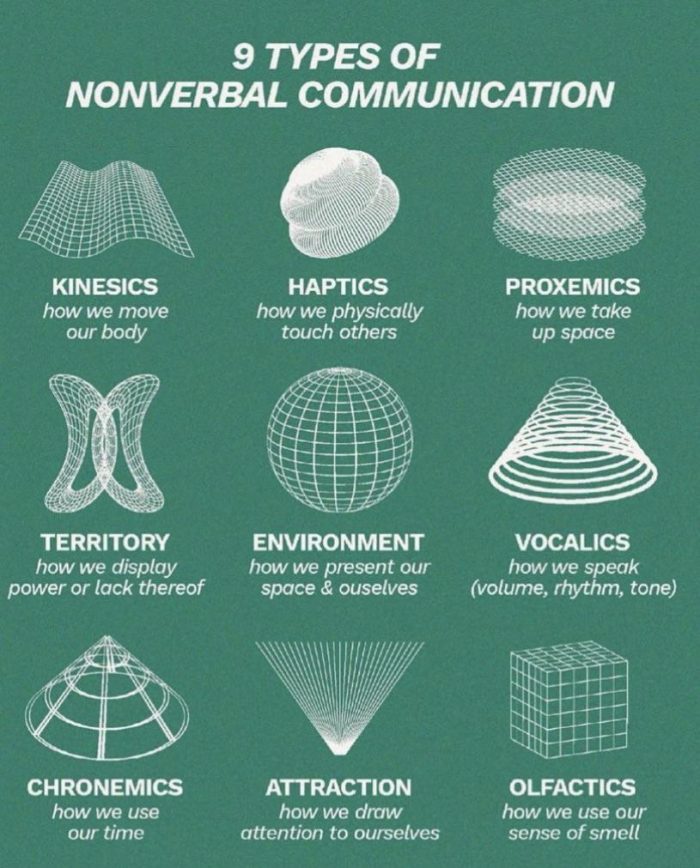 In the study of communication, there are a lot of terms thrown around. One is kinesics, which refers to body language and gestures. Kinesics is only one part of non-verbal communication—there are also haptics, proxemics, territoriality, environment, vocalics (pitch and volume), chronemics (time), and attraction. In this post we’re going to look at some of these components in more detail and hopefully make you think about how you communicate differently from others.

Kinesics is the study of body movements and gestures. These movements can be extremely subtle, but they are still an important part of nonverbal communication. You may not realize it, but you use kinesics when you want to emphasize a point or make yourself seem more confident. This type of nonverbal communication includes things like eye contact, facial expressions, posture and hand movements. Kinesics also includes the way we talk: our tone of voice and speed are all important factors in how we communicate with others.

Kinesics behaviors include Posture: How you hold yourself can say a lot about your attitude – slumped shoulders suggest sadness while standing up tall shows confidence or pride; Facial Expressions: This includes smiling and frowning as well as raising an eyebrow in surprise or wrinkling ones nose when smelling something unpleasant; Gestures: Hand gestures such as waving hello or pointing at something show that someone wants to bring attention to something specific-for example waving goodbye after spending time with someone would mean saying goodbye both verbally (bye)and nonverbally (hand wave).

Haptics is a form of non-verbal communication that uses touch. Touching can communicate affection, dominance, comfort or power. Touching can be a sign of affection, or it can be a way to control someone. It can be used as a sign of empathy. For example, if you’re trying to comfort someone who’s upset, you might place your hand on their shoulder or even put an arm around them. Touching is also often used during arguments as way to assert dominance over another person and make them feel inferior.

Proxemics is based on the idea that there are four zones around a person: personal zone, social zone, public zone and intimate zone. These zones are defined by the physical distance between two people (or an individual and whatever else they’re interacting with). The closer we get to someone else, the higher our level of intimacy becomes—and vice versa.

One of the most common forms of nonverbal communication is territory, which may be physical, social or psychological.

When we want to show ownership over something, we create a barrier that says “this is mine”. It can be as simple as sitting with your legs pressed tightly together or leaning forward slightly in a chair at work to make sure no one else sits next to you on the train home. This might seem like an insignificant action but it can be symbolic and powerful if used purposefully; think about how people react when they see their favorite sports team’s logo on someone’s shirt!

Territory can also be used as a way of expressing power or status (see also The Power Position). For example: A person who wants others to feel inferior might stand close by another person while they talk meaningfully into their ear so that bystanders have no choice but watch them closely – this sends out signals that indicate “hey guys look at me being listened too by this important person standing right next me! Aren’t I special?”

The environment is the setting in which a communication takes place. It can influence the way people behave and interact, but it can also enhance or distract from their messages. A few examples of how you might consider your surroundings when communicating include: Positioning yourself away from distractions (such as other people) Using color to emphasize key points (i.e., green for growth, red for fire)

Vocalics is the study of voice. It includes vocal tone, pitch, quality and inflection. Voice tone refers to a person’s level of enthusiasm or interest in what they are saying; it can be high-pitched if you’re excited about your topic or low-pitched if you’re bored with it. Pitch refers to how high or low your voice sounds; a higher pitch means that your vocal cords are vibrating at a faster rate than normal whereas lower pitches mean slower vibrations. Pitches can range from around 100 cycles per second up to over 7000 cycles per second for men and women respectively – this huge range allows us humans plenty of flexibility when communicating verbally! Voice quality refers to how smooth or rough an individual’s speech sounds; for example some people sound more ‘harsh’ than others due to their throat muscles being either tense (strained) or relaxed (relaxed). This also affects intonation which we’ll discuss next.

One of the most common forms of nonverbal communication is attraction. When you see someone attractive, your body will respond in a specific way. This can be as subtle as breathing more heavily or blushing, or it may be more obvious such as smiling, gazing at them for longer than normal and even touching them. This behavior is usually unconscious but can also be deliberate if you are attracted to someone and want to let them know that fact!

There are many more types of non-verbal communication, but these are the most basic.