Evolution: Life On Earth Is One Big Extended Family 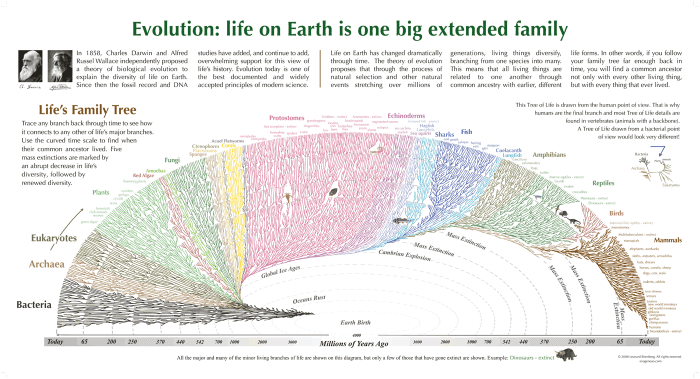 I am a firm supporter of the theory of evolution. I was recently engaged in an argument in which the person opposing me did not believe in the theory of evolution. I have chosen this infographic specifically to promote this theory, because I feel that it is time for humanity to embrace and accept it as the most plausible explanation of (as Darwin put it so eloquently) the origin of species.

Every living thing is connected. You share something in common with every other living creature/plant on this planet. The thing we all share in common is not just life itself, but genetic codes. From the very first instance of life on earth, DNA has been morphing and changing in extreme ways with each new generation of living things. Basically, this genetic code can change based on a number of different causes, but mostly relating to the environment in a living body’s surroundings. This is how a plant can become a squirrel. It takes more time than is humanly observable for a change that drastic to occur, but it occurs nonetheless. This is the primary reason I feel most people have trouble understanding evolution.

We have made it convenient for humans to understandÂ  by pictorially describing evolution in a linear fashion, as shown by the popular image of the ape-to-man progression. I feel this image has only added to the confusion. Firstly, humans did not evolve from apes; we share a common ancestor, which is the reason we are related to them. Secondly, it makes it seem like two apes got it on one day and all of a sudden the first human being popped out, and then eventually other human beings happened, and then it became normal. The problem is that the image fails to show the millions of years in between. It wasn’t that the creature looked like a monkey, and then looked like a human. It was a process that took countless occurrences of genetic changes that created what we now call a human.

I could go on for days trying to explain the theory of evolution, but it would appear that I have far surpassed my preferred word-count, so I will stop here. I urge anyone that does not support the theory of evolution to further examine it and to seek to understand it, because it is something that is happening, and it’s time the world accepted it. [via]

The Great Barrier Reef Is Bigger Than You Thought