An Ultimate Guide To Sitcom Sofas 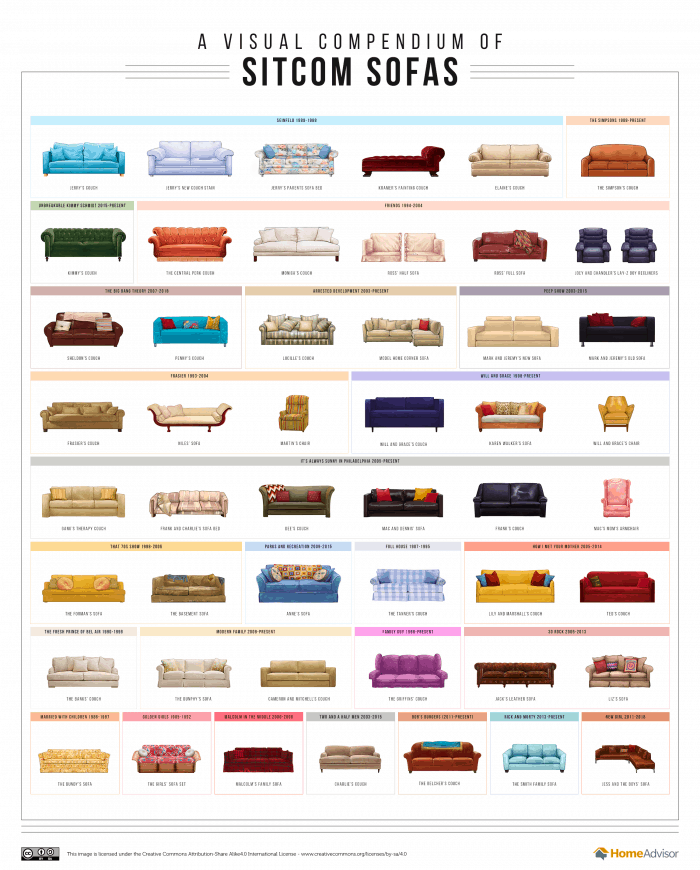 In the world of sitcoms, a simple sofa can have large ramifications for the show. There’s a reason that it’s considered the perfect sitcom prop!

While in real life a sofa is usually just a sofa, in sitcoms, the sofa is often a star of its own. The sofa can represent so many different things in a sitcom, from simply forming the center of a studio stage to symbolizing family values. There’s a reason producers add this little piece of furniture to their shows.

Aside from the overarching ways a sofa can affect an entire sitcom, a sitcom sofa can also speak volumes about its owner(s). For example, check out some of the sofas from Seinfeld. Jerry’s softly-furnished, grey-blue sofa is simple and effective much like Jerry’s character himself, who enjoys the lifestyle of interacting with his friends and basically just hanging out. On the flip side, in his home, Kramer has a vintage fainting couch that fits his unique personality, showing his quirky style.

This infographic isn’t only limited to live-action sitcoms, either, as various cartoon sitcom sofas are included as well–from the iconic orange Simpson’s sofa to the Griffin’s funky pink sofa from Family Guy.

While I could go on all day about all of the sofas in this infographic and what they mean for their shows, I’ll instead let you see today’s infographic for yourself!