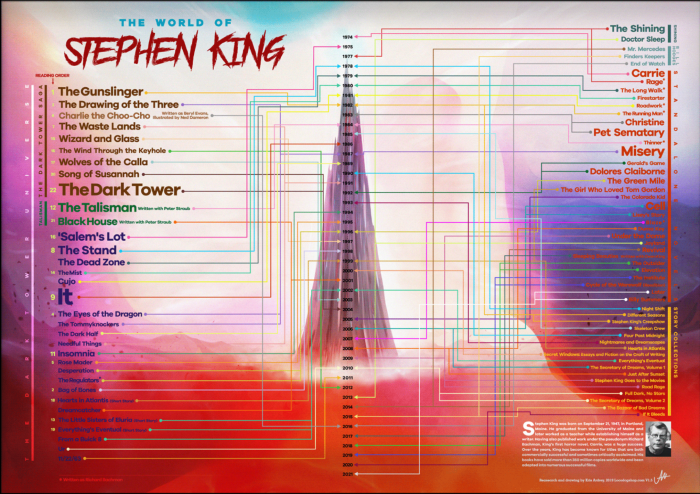 Stephen King is a well-known and prolific writer with a massive collection of over 200 short stories and 50 full-length novels. He is best-known for his work in the horror genre, but he has written science fiction, mystery, and crime novels, as well as several short story collections as well.

Below, we’ll be taking a look at his most famous pieces of literature, and the included infographic will show all of his books and short stories in chronological order. Let’s get started!

How Many Books Has Stephen King Written?

Stephen King has written 63 novels, some of which were under his pen name, Richard Bachman. He has also written five non-fiction books and around 200 short stories.

What Are Stephen King’s Most Popular Books?

Stephen King is a prolific writer who certainly seems to understand how to write a best-selling book, but what are his most famous books and short stories? Glad you asked! Below are some of the most popular Stephen King books. Note that there are some spoilers below, so you may just want to peruse the list if you haven’t read these pieces yet.

Carrier is the first of Stephen King’s books that introduced his horror work to the world in 1974. It was later adapted into one of his highest-grossing movies.

The novel features a teenager, Carrie White, who has telekinetic powers and deals with an abusive mother and bullies from school. She decides to use her powers to take revenge on her abusers. Unfortunately, things get out of hand, and she destroys the fictional town of Chamberlain, Maine.

Salem’s Lot is definitively in the horror genre and the second published novel from Stephen King. This novel talks about a writer named Ben Mears, who returns to his hometown, Jerusalem’s Lot, after 25 years.

He starts writing a story about an abandoned mansion when the town around him begins to fall apart. Suddenly a child dies, and his brother becomes a vampire and starts infecting people in the town. A battle erupts between the vampires and humans, including Ben.

This novel earned King a nomination for the World Fantasy Award and the Locus Award for the All-Time Best Fantasy Novel.

The Shining is another horror novel and is one of King’s most famous books because it was his first best-selling novel. The Shining was adapted into a hit movie in 1980 and is considered one of the best King movie adaptations.

It tells the story of Jack, the new caretaker of the Overlook Hotel and a writer who lives with his son and wife. His son, Danny, has special powers called “shining,” and there are evil spirits in the hotel trying to possess him. Hell breaks loose when the spirits fail to possess Danny and possess the dad instead.

The Stand is a story of a virus that wipes out a large part of the world’s population. The survivors split into two groups, and a battle between the good and the bad ensues. Stephen King fills the story with classic fantasy elements and supernatural motifs.

The Long Walk is among the seven novels under the pen name Richard Bachman, and its plot is set in the future. It is a tale of an imaginary America under the leadership of a dictator.

The protagonist is a 16-year-old who has to participate in “the long walk,” a competition between 100 boys who have to keep walking at a set speed. The protagonist discovers a lot about the lives of the other participants and society during the walk.

This novel is about Jake Epping, a teacher and a time traveler who tried to prevent the assassination of President John F. Kennedy. King derives the title of the novel from the date of Kennedy’s assassination, which is November 22, 1963.

It is a brilliant book, named the greatest book of the year in 2011 by the New York Times.

The Dark Tower is a collection of eight novels plus a short story collection. In this series, a dark tower connects the whole universe. Roland Deschain, the last gunslinger, is on a mission to find the dark tower.

This series stands out because it connects most of King’s novels and serves his enthusiasts fiction, science, fantasy, and, of course, horror.

This novel narrates the story of seven children, followed by a monster called “it” in a fictional town called Derry, Maine. We first see the kids in 1958 and later in 1985 as adults dealing with the childhood trauma from the monster’s attacks.

The adults reunite after finding out that “it” is once again killing children. The story continues as they battle the monster with some flashbacks from their childhood. It was made into a made-for-TV movie and later adapted into a feature film.

The Green Mile follows inmate John Coffey, who is in prison for killing two girls. He has supernatural powers and can heal people, transferring the extracted disease to another person. The captain of the prison, Paul, discovers that John has healing powers after he heals a rat. Later, the court finds John innocent, and the explanation of what happens to those he has healed keeps the story going.

Pet Sematary takes place in a fictional town in Maine, where the main character Louis moves with his wife, kids, and cat called Church. Their neighbor, Jud, takes them on a trip to a pet cemetery, only for them to discover that the town is haunted and the dead won’t remain dead and buried.

Some other works that Stephen King wrote that nearly made the list of the top 10 books are listed below:

With more than 100 published books, it is safe to say that there is a book for every reader from Stephen King’s collection. He is the King of Horror, but on many occasions, he transcends that title to explore other genres. Whether you’re just being introduced to King’s works or want to be reacquainted with some of his classics, this list should provide endless entertainment!