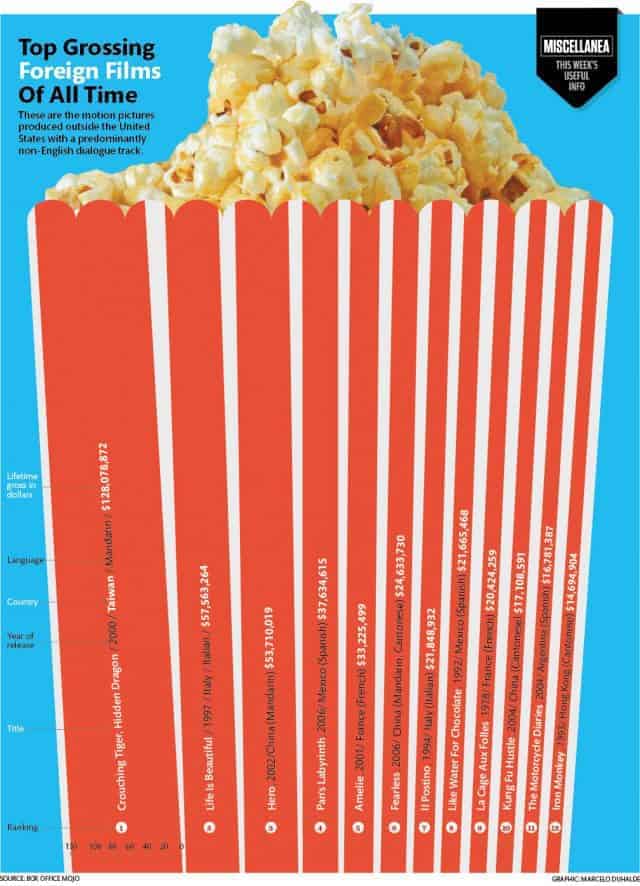 In the mood for a movie? But not necessarily with an English speaker’s perspective? Check out today’s infographic on the top grossing foreign films of all time.

The design of this infographic is particularly pleasing, I mean who doesn’t love popcorn? And my favorite film on this list, by far, would have to be Amelie, the tale of an odd-ball french girl who falls in love, and makes a game out of getting to know her love interest. And if you’re looking for something just as imaginative, but a little creepier, check out Pan’s Labyrinth. This story incorporates the real world with a mythical one and is based on a highly vegetated labyrinth, a faun creature, and a little girl; Life is Beautiful is another great movie, a heart-wrenching but also heart-warming film about a boy, his father, and a Nazi concentration camp.

Foreign films can make you feel like you’re traveling in another country, seeing different lands, and hearing different languages without being a tourist. Subtitles may be a little annoying at first, but most people are able to get over them after the first ten minutes of the movie.

So, break out the popcorn, and make sure to view one of the films listed in the graphic below. [Via]